As the editorial team take a short summer break, we’ll be leaving you with a reduced blogging schedule so that you still get your daily dose of wedding lovely. Usual service will recommence on Monday 31st August 2020 but in the meantime watch out for recaps of some of our favourite Real Weddings shared during the first half of 2020.

Drop in every day for the very prettiest, most unique wedding inspiration and – if you are a Brides Up North bride – to see if your real wedding was one of our top picks. 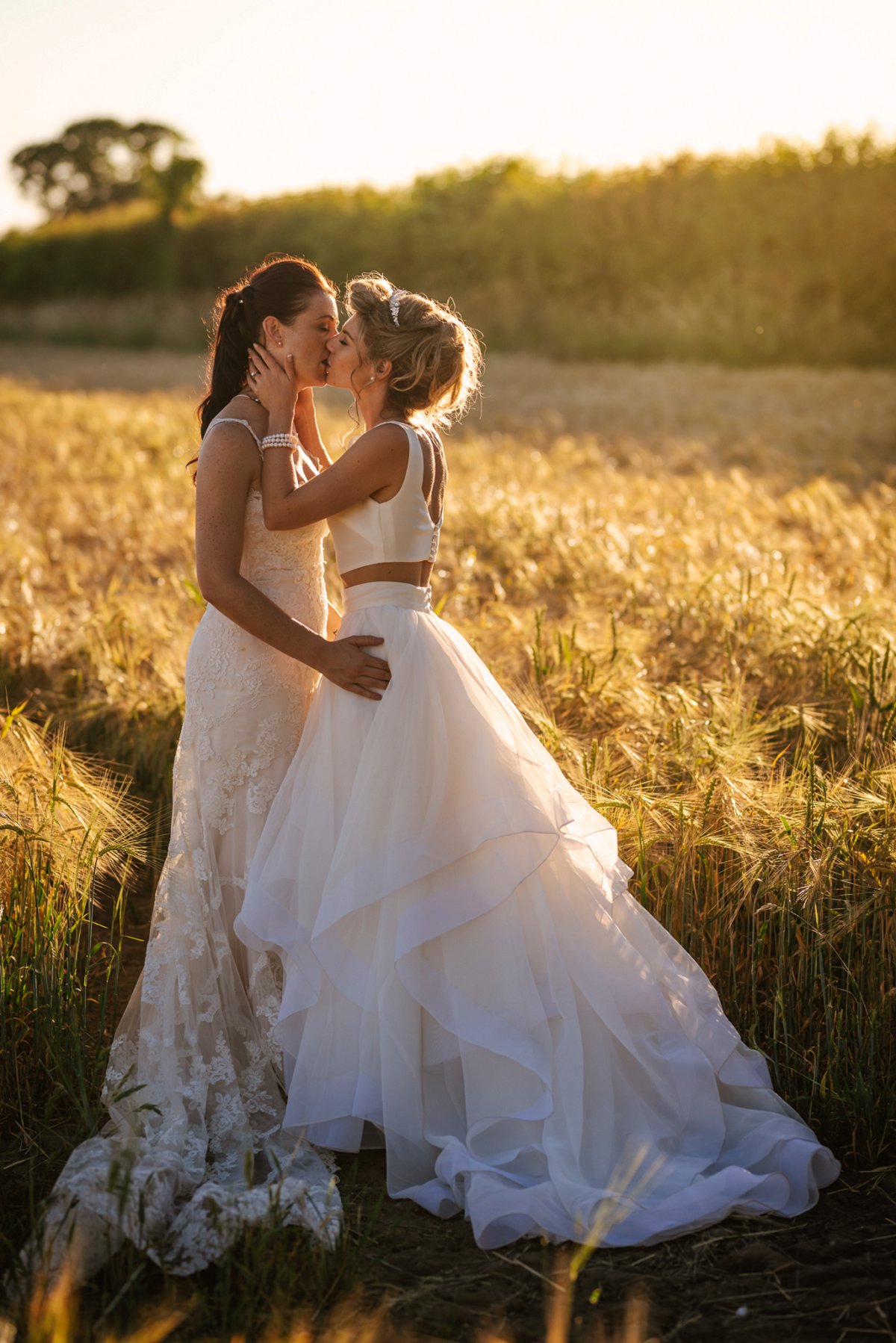 It’s a glitter party for Roxy and Jody’s magic door and Magic Kingdom themed wedding day at the stunning Aldby Park in York.

When the fairytale wedding starts with a romantic glass slipper on a cushion and proposal on one knee! Swoon! Jody really knows how to make a girl feel special!

Did you know that June is the luckiest month for marriage, according to tradition? This happy couple picked a June date after doing their research, and then settled on a marquee wedding in the immaculate grounds of Aldby Park to give them flexibility and photo opportunities galore.

And the dresses! Antique lace Stella York meets a modern David’s Bridal crop top two piece, both brides look simply stunning (but stay tuned for Roxy’s outfit change!), while the floral arrangements and the outfits of their bridesmaids and bridesmen help set the colour scheme, with pops of a whimsical and pretty blush pink.

With photography by Chris Milner Photography 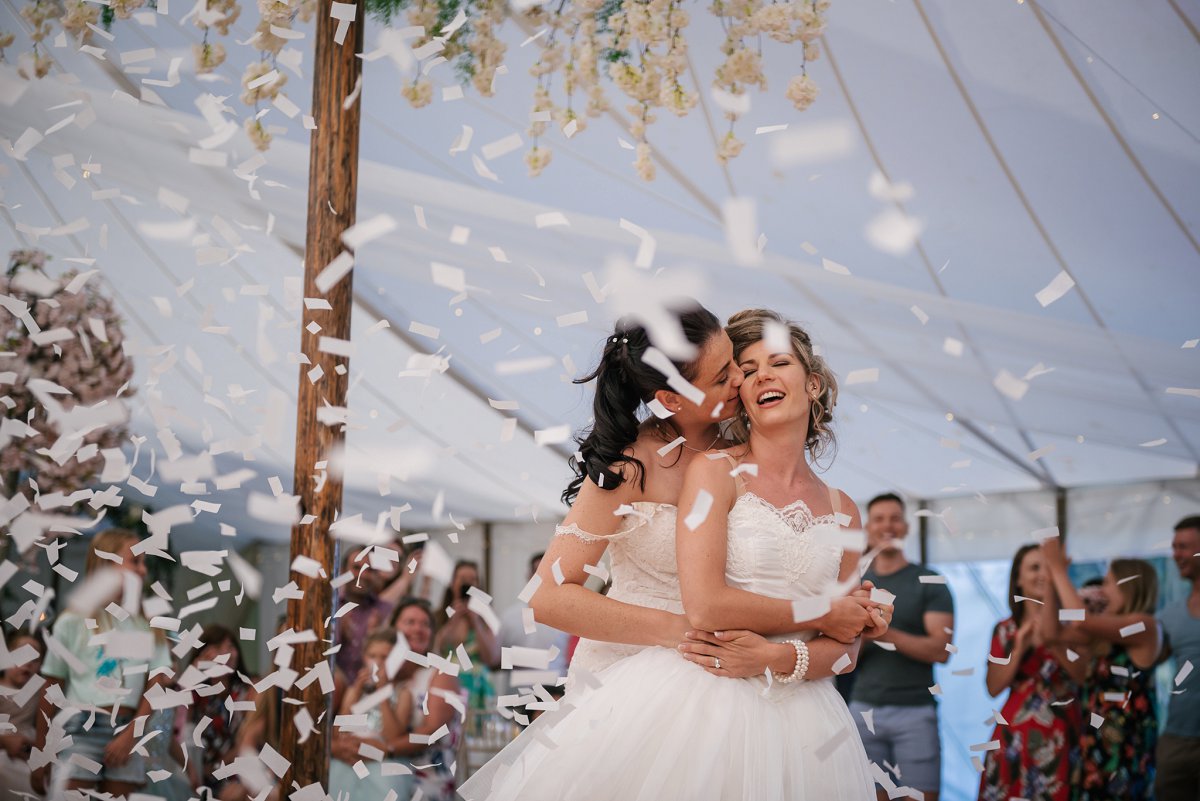 Roxy says: We got engaged in June 2017 at Disneyland Paris. It was just like in the Disney fairytales! We went for a meal in Mickey’s Cafe and, while I was eating dessert, Mickey and all the characters gathered around our table. A waitress presented me with Cinderella’s glass slipper and written on it was “I fall for you every day, Roxy, will you marry me?” While I was in shock reading it, Jody got down on one knee and proposed. We hugged each other and the entire restaurant started cheering. It was so romantic, she even organised a bunch of flowers just like the first ones she ever gave me.

Roxy + Jody // The warmth of your heart // Aldby Park Wedding Film from Story of Your Day on Vimeo.

We got married June 30th because we wanted an outdoor ceremony in the summer and because we read about a few traditions online. Apparently the month of June derives its name from Juno, the Roman goddess of marriage. It was thought that couples who married in June would be blessed with prosperity and happiness. Also, during medieval times, a person’s annual bath usually fell in May or June, meaning that June brides still smelled relatively fresh. The brides would have smelled more pleasant then than before but just to be safe, brides carried a bouquet of flowers to hide their body odor. Hence the custom of carrying a bouquet when walking down the aisle!

The ceremony was in the beautiful garden at Aldby Park in York. We hired a marquee to hold the reception there too. We chose the venue as it was such a beautiful setting to have a really personal wedding. It was so flexible, we could really design the whole day and have the bespoke wedding of our dreams. It has beautiful views, gardens and a river at the bottom, perfect for great photo opportunities.

We set up a Pinterest board and mixed a few themes together. We named our board ‘Fairytale, Garden, Glitz’ which was an infusion of rustic country garden with some fairytale Disney here and there, and a touch of sparkle and glamour. We had lots of beautiful flowers inside the marquee also and our colour choice was blush pink.

We had a humanistic ceremony that we designed ourselves, so we were able to have Buddhist readings and songs such as Imagine by John Lennon. 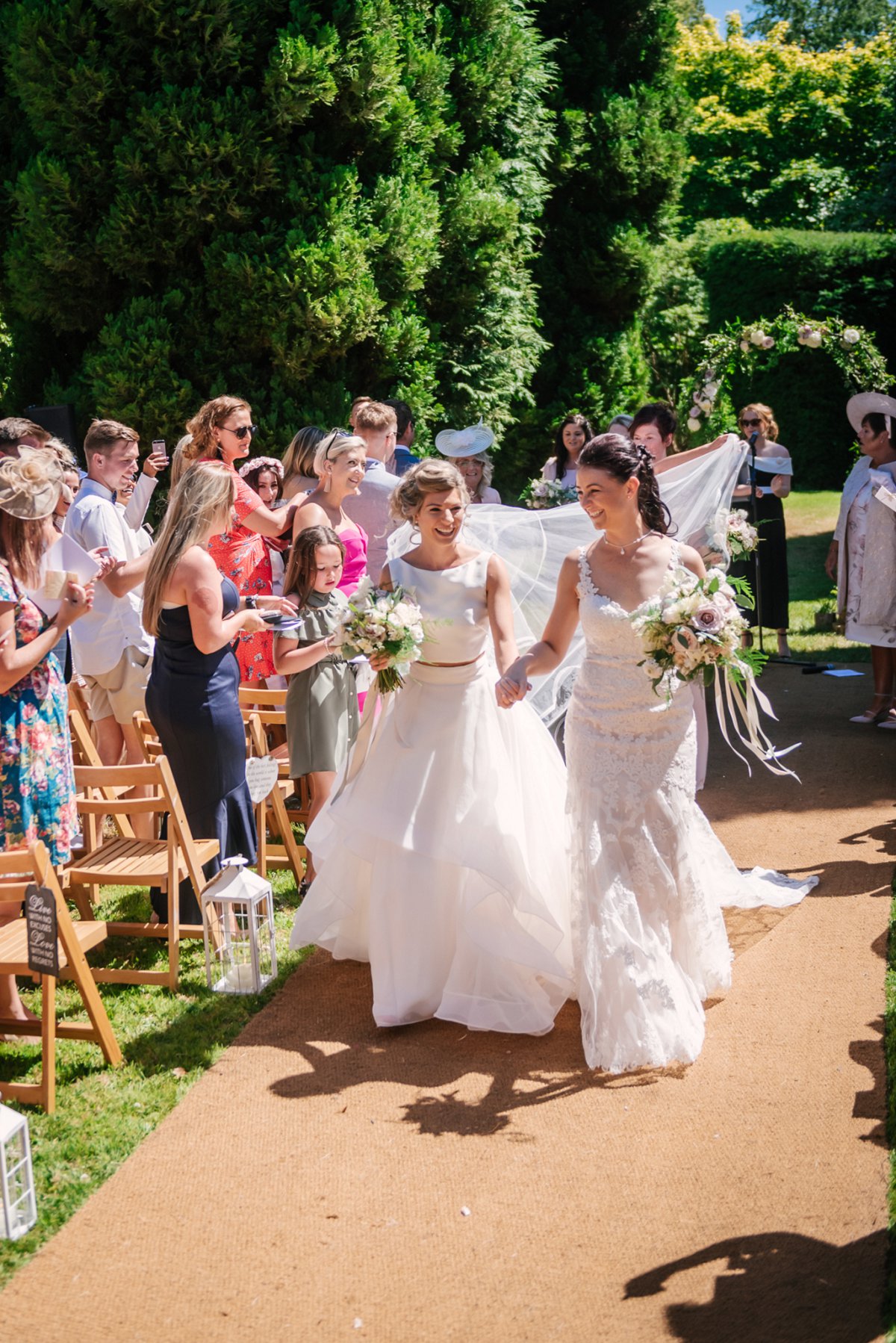 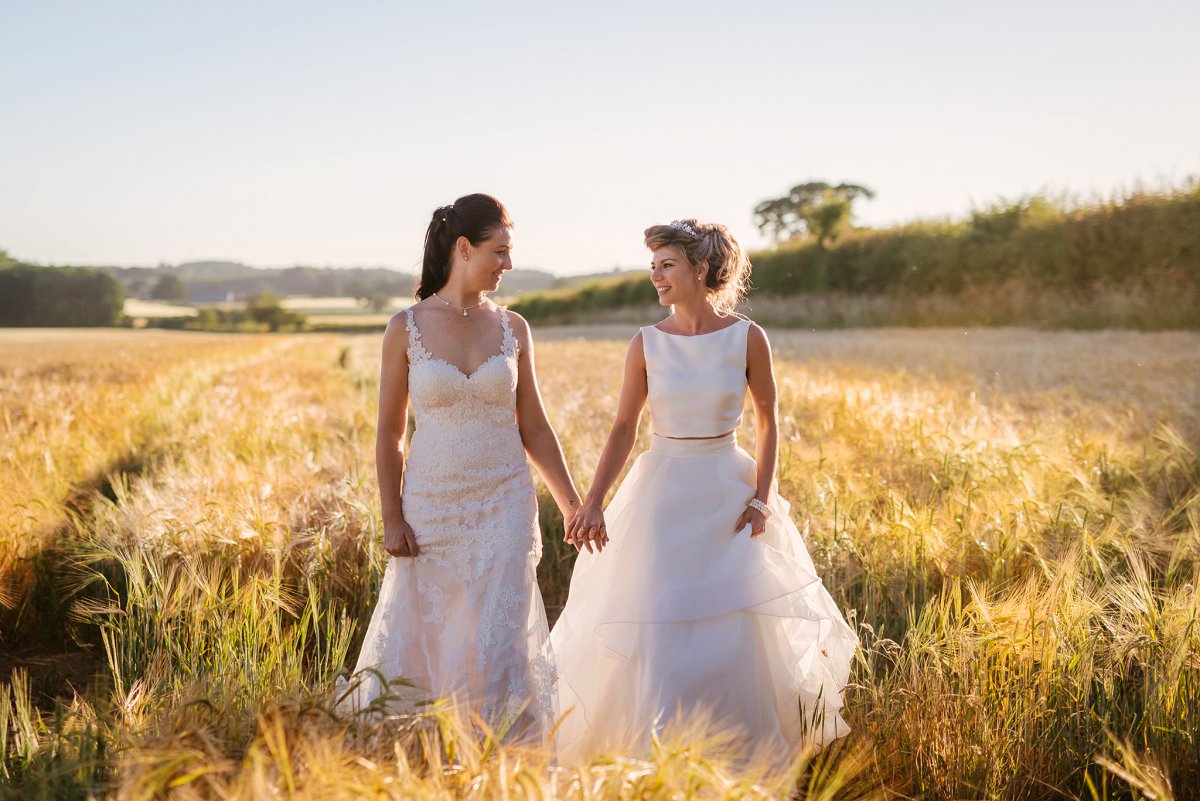 We both wore wedding dresses that were a secret to each other until the day. I wore a two piece from David Bridal with a Mikado silk crop top and tiered organza ball gown style skirt paired with a Vera Wang two-tiered, organza, cathedral length veil. I felt it was very me. I love crop tops to go out in and I loved the modern look of it. It was so unique. I went to about 20 dress shops and saw nothing like it. I have to confess a big part of my decision is because it was so comfy!

Jody wore an Amilia gown by Stella York antique lace gown in a unique almond colour. She got it from Abigail’s Bridal Boutique in Leeds. 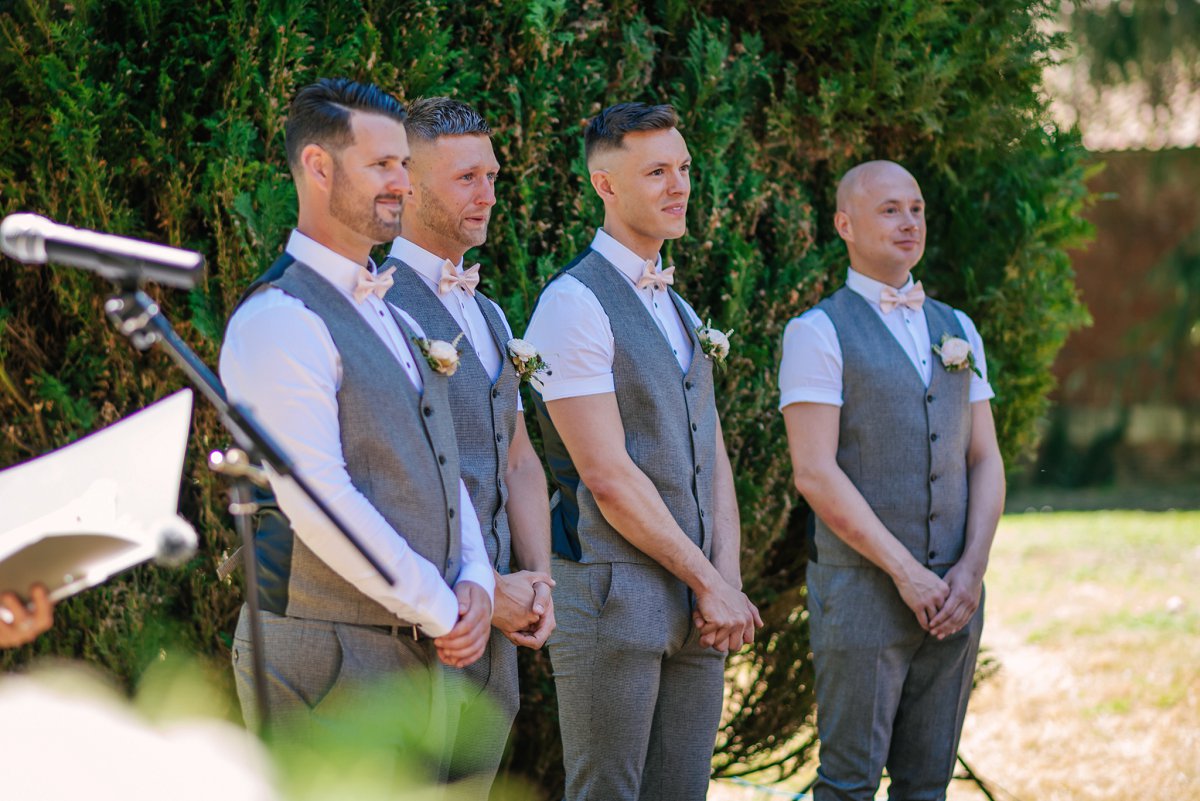 We wanted the bridesmaids to feel as beautiful as we would on the day, so we gave them a budget to choose their own dress. That way they could wear something they loved. We asked them to stick to blush pinks, which was easy enough, there were lots of options in the shops as the colour was in that season

We had Helena Betts for makeup.

We hired two cream VW camper vans, so that we would have a van each. These were from Vintage Wishes. 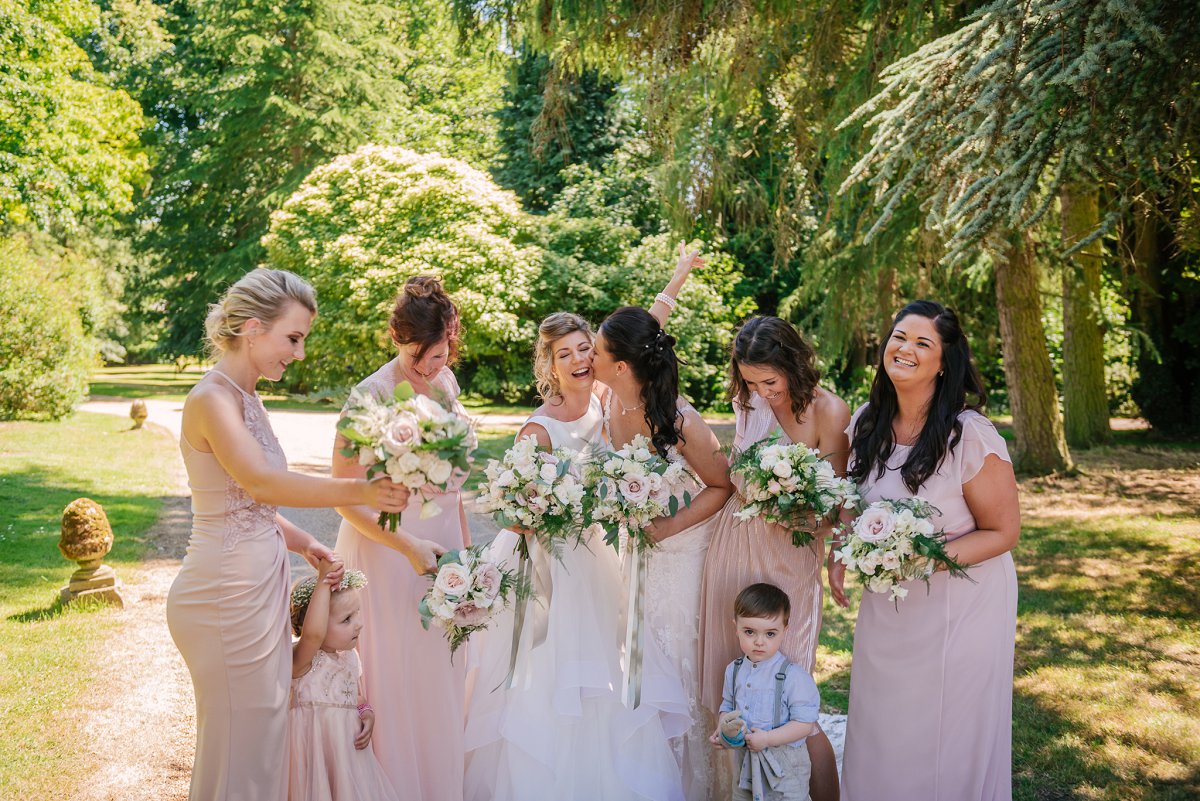 We would definitely recommend our photographer, Chris Milner. He was such a calming presence on the day great to work with, professional and friendly. His photography and editing is outstanding.

We had Emma from Story of Your Day. We loved her style and the cinematic finish and wanted something we could look back on. Emma was professional and really understood what we wanted. She captured some beautiful moments.

We both had relaxed bouquets with trailing ribbon in blush colours. We had a flower arch for the ceremony and reused it in the marquee to form the ‘magic door’ entrance.

We had blossom trees on the table and two flower ring ‘chandeliers’ hanging down from the marquee. 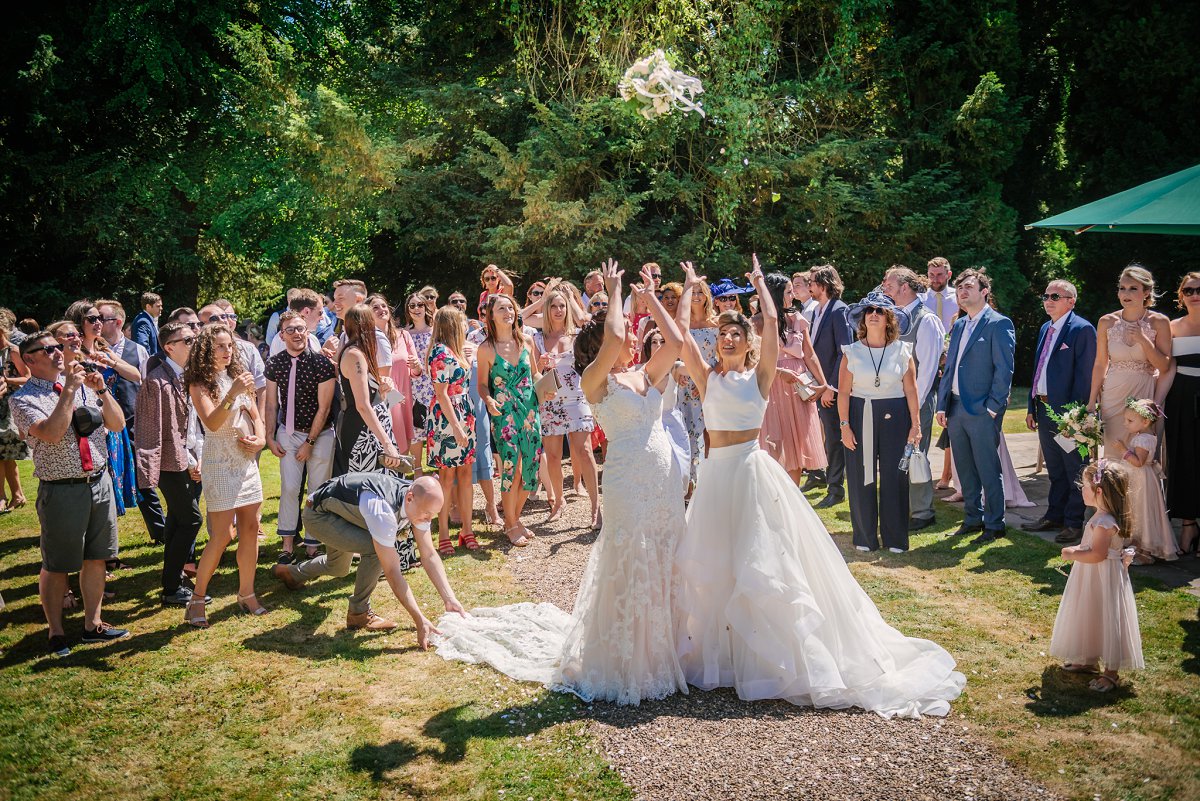 Our favours were small jars of local Yorkshire creamed honey and a magic glittery bean in an organza bag, with a little message saying “trade your magic bean for face paint glitter or dancing prop”. We called our wedding ‘Magic Door Wedding’ based on our favourite club night in Birmingham. The concept was that, at each event there was a magic door you could enter and on the other side, you could trade a magic bean for some form of fancy dress or makeup.

We would also definitely recommend having a photo booth as it was so much fun and the photos made a lovely souvenir for the guests. We mainly had one so guests could get pictures of their magic door glitter and face paint!

We placed the Cinderella’s slipper that Jody proposed with on three stacked pillows made of cake and the cake table was a pumpkin carriage, for our Disney theme. It was made by Board to Tiers in Morley. 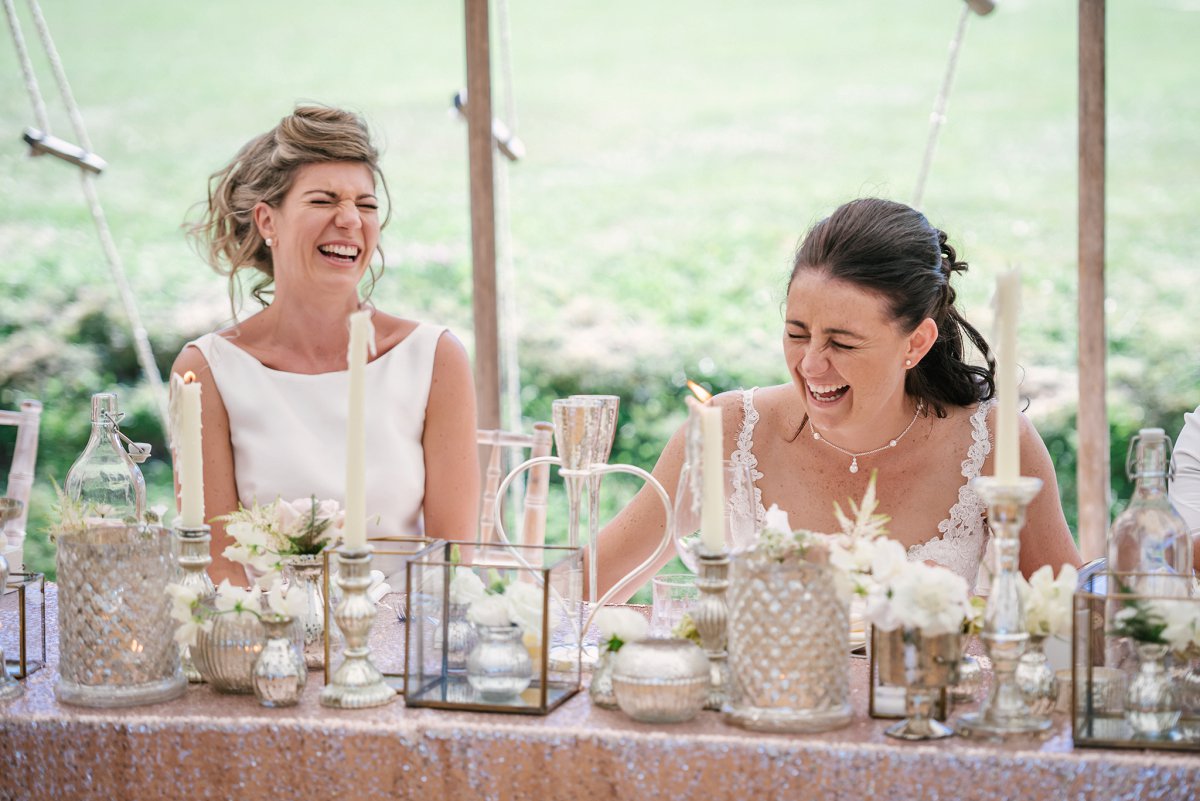 Cater Me Tasty did canapé starters right after the ceremony. We then had a traditional roast dinner, followed by a trio of our favourite mini desserts; chocolate brownie with edible glitter, mixed fruit and sticky toffee pudding

We had a Saxophonist play to house music. She was called Sam and she was amazing and played all our requests. We then also had a DJ, called Josh, who was awesome. He even bought a Mickey Mouse sequinned t-shirt to wear later on in the evening, to go with our magic door theme. They and the equipment were supplied by Club Class Entertainment. We’d highly recommend them. They organised lasers, picture projection (two Minnie Mouses for our Disney theme) and confetti cannons. 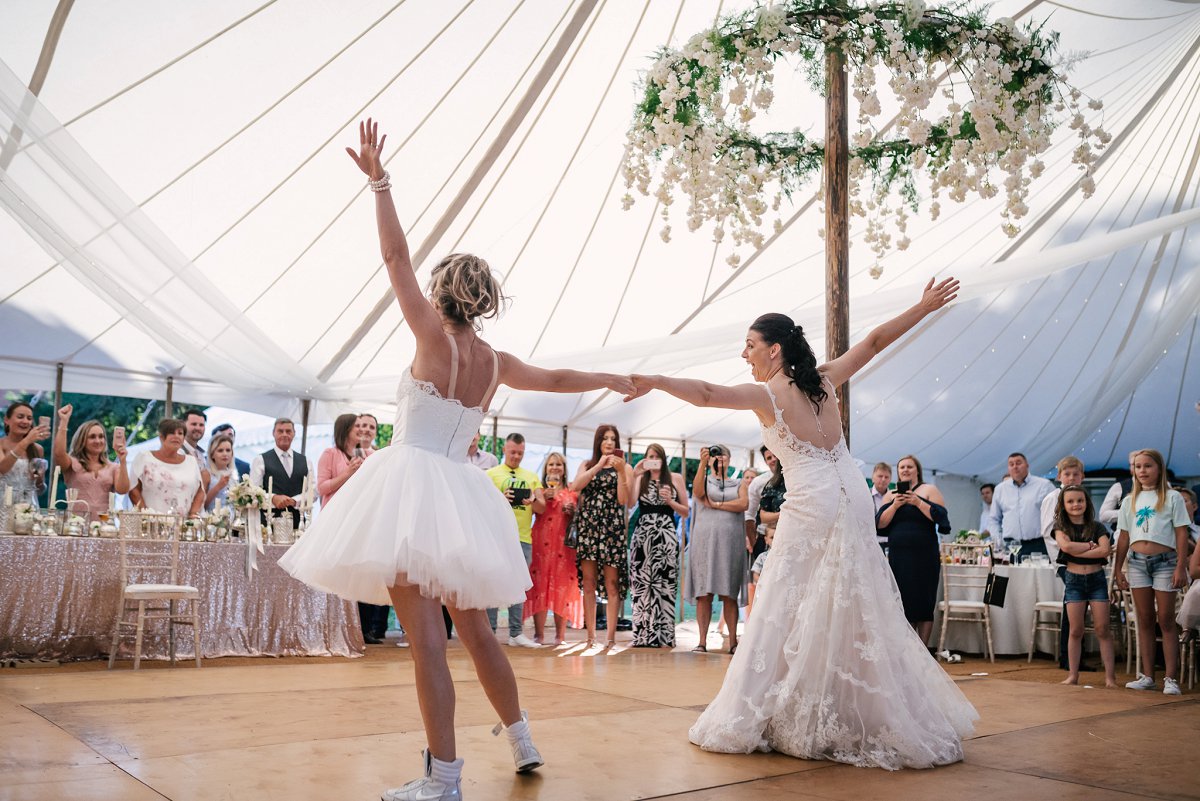 Most definitely our venue. We’d recommend it to anyone. It was amazing and offers so many great photo opportunities.

My favourite part of the day was when we got to spend time together doing our photos. And when we were dancing together to house music and the sax player. 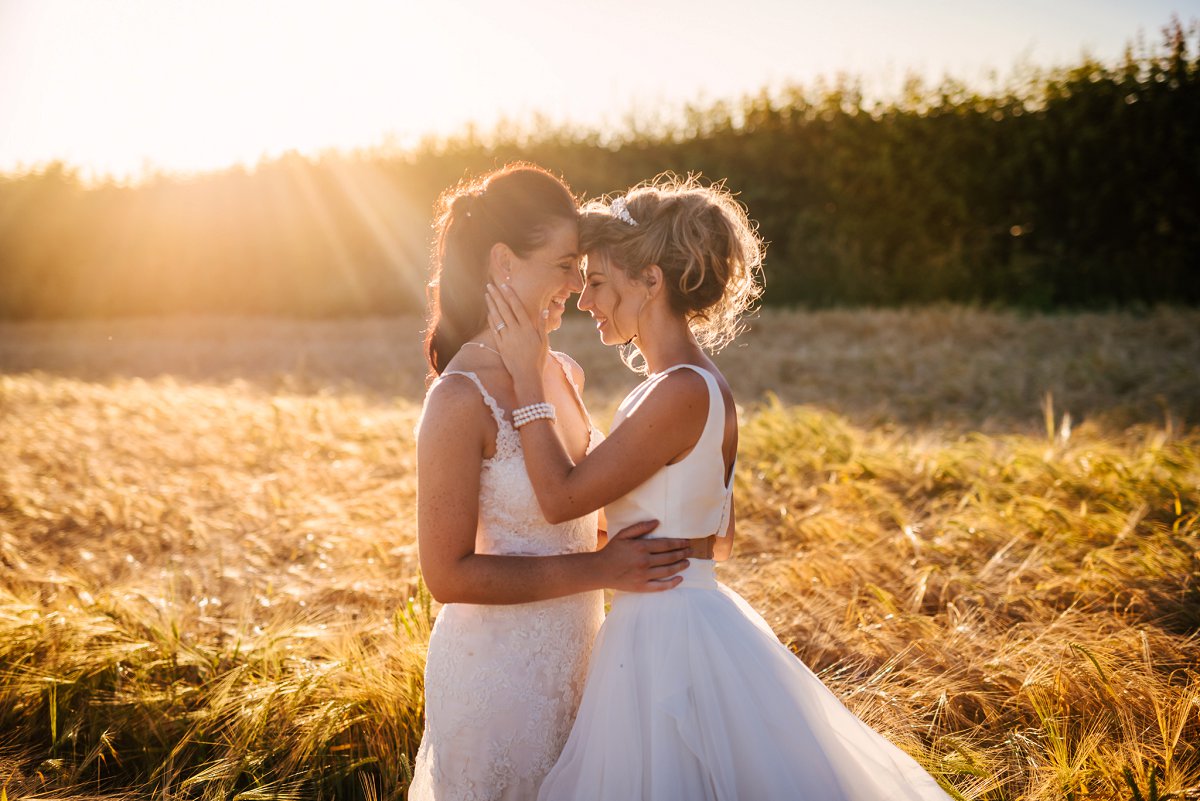 We went to Mexico, to Isla Mujeres, Cancun and Tulum. It was the perfect mix of relaxation, culture and party. We climbed Coba in memory of my late father, went to Xcaret National Park, abseiled into a cenote (underground cave) and went to the famous Coco Bongos club. Our favourite day was spent traveling around the entire island in a golf buggy, side by side, taking in the sights. 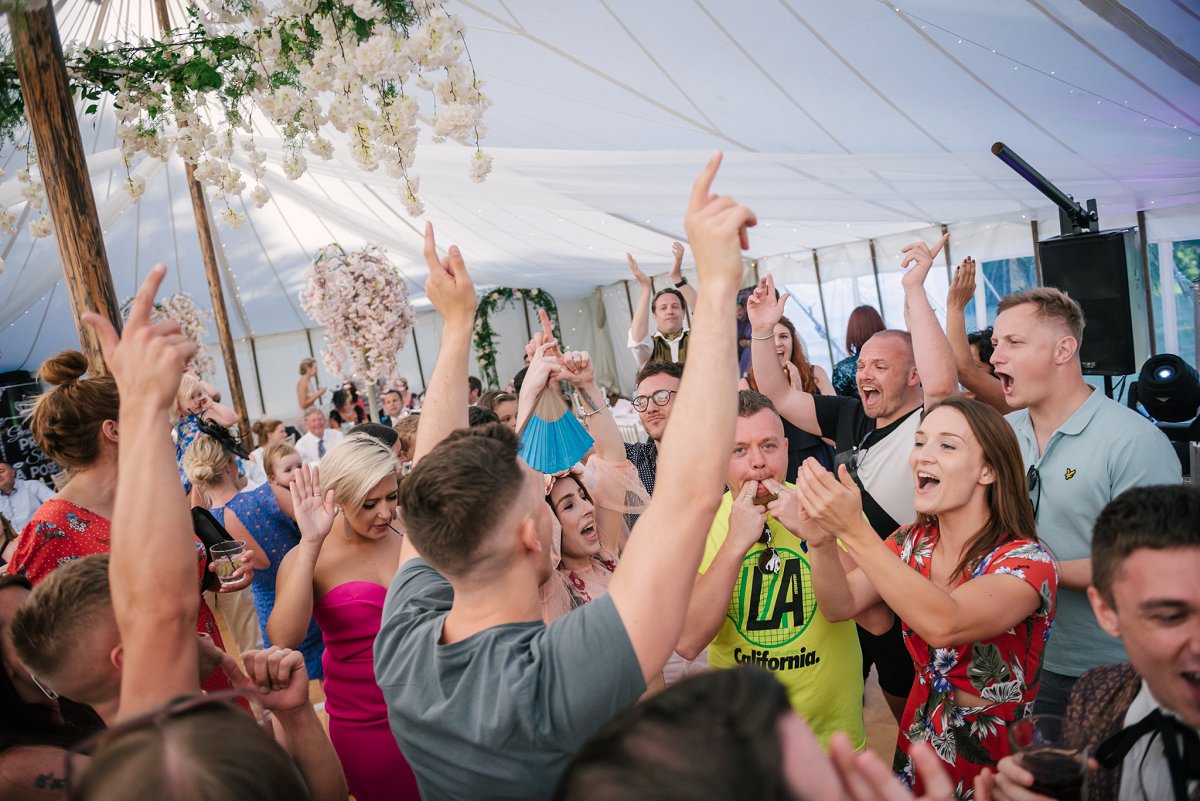