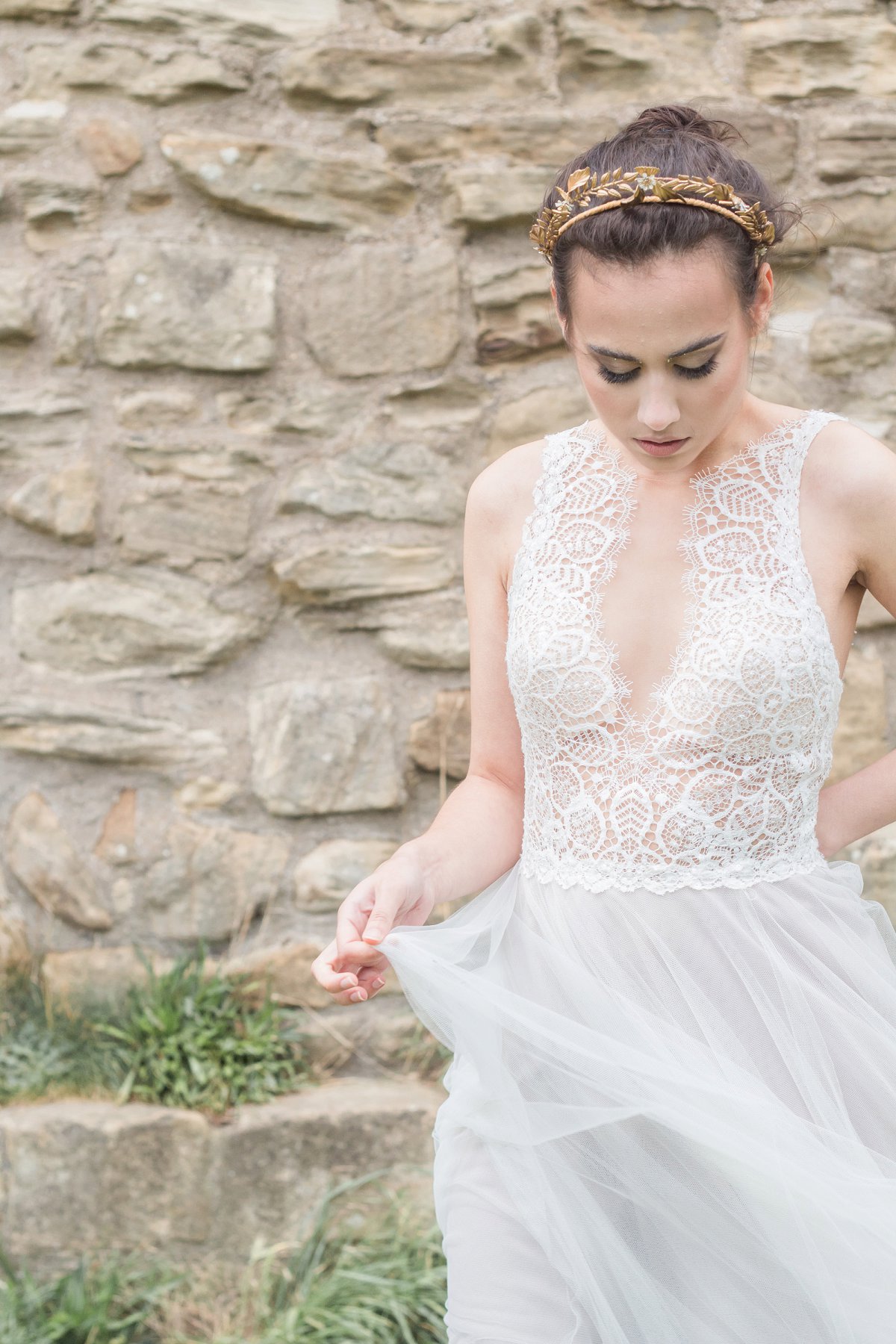 When visions become reality. Photographer Lam has coordinated and captured the most beautiful styled shoot for you today. Let yourself be swept away by all the romance of sunny Italy conveniently brought home to windy Wakefield.

If you’ve always fancied tying the knot in a Tuscan hillside villa or on a beach in the med, styled with olive branches, local lavender and fresh lemons, but Covid-19 has scuppered your plans, then you’re going to love this one. Lam, of Lam D Peretti Photography, has kept everything super pretty and pared back with lots of natural styling and pale lemony yellows, lightweight gowns and sundrenched simplicity.

The one thing that no bride can control on her wedding day is the weather and this styled shoot was no different! Even checking the weather forecast religiously in advance can’t prepare you for when Mother Nature unleashes her feisty side! But Lam and co have managed to create the most stunning effect, against the odds and elements, and actually woven the storm into the fabric of the finished product, ensuring that the chilliness doesn’t come across and actually making the wind work in their favour! So don’t panic if the forecast doesn’t look great for your big day. Let shoots like this be the inspiration to let go of what you can’t control and go with the flow. 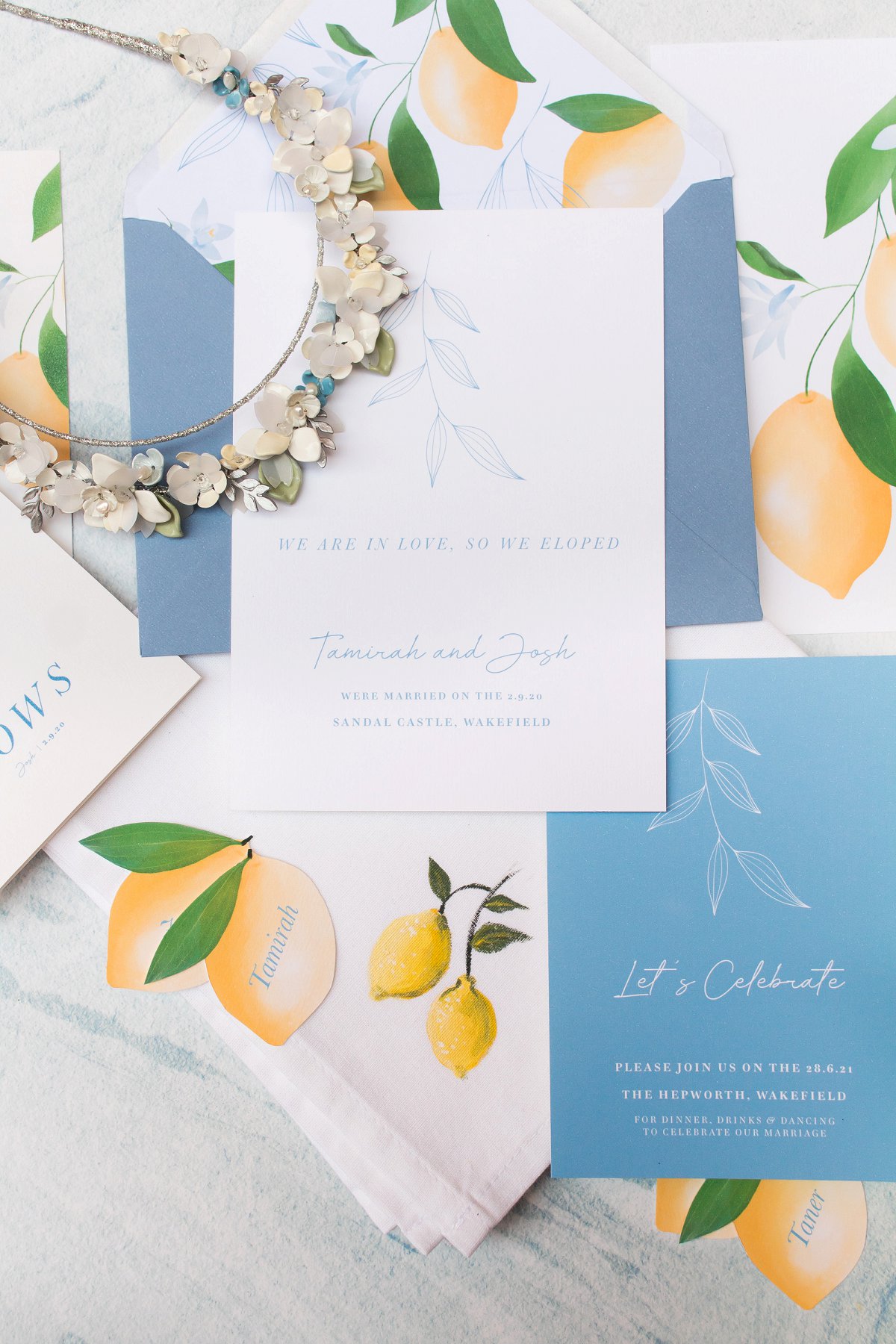 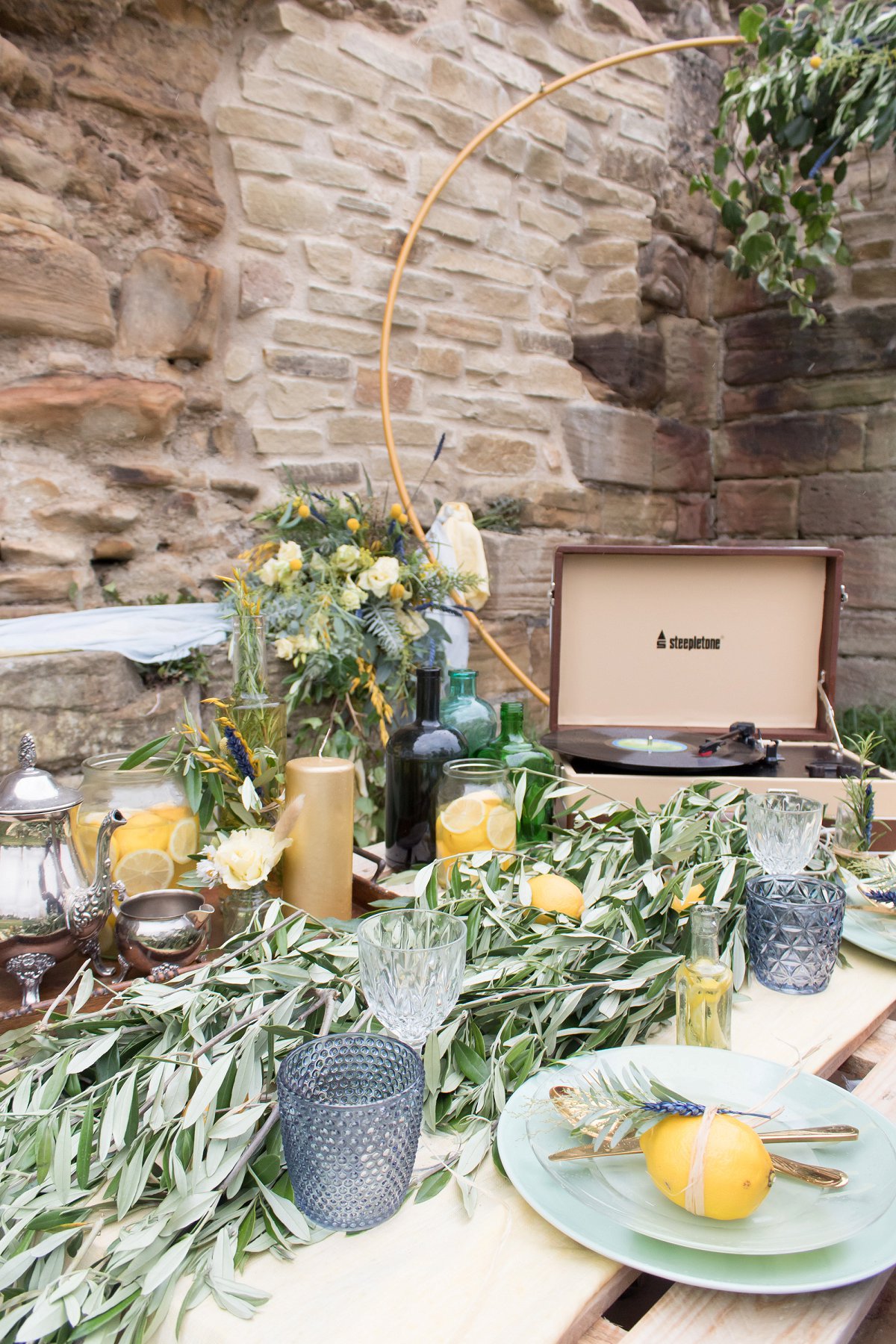 Lam says: Mediterlemon (Medi-ter-lemon) was the working title of this shoot. When life gives you lemons, make it the theme of your elopement! Since we can’t get to Italy at the moment, why not bring the Italian Mediterranean dream here instead? We’ve all missed the olive branches, beautiful weather, bright colours, and all the lemoncello that Italy inspires, so this elopement styled shoot is here to bring that happy, vibrant and lush Mediterranean vibes that we can’t wait to get back to. The colour scheme of the shoot includes dark and light shades of blues, with hints of warmth from lemon yellows. This shoot hopes to inspire and bring just a little essence of the beautiful blue skies and yellow sunshine of the Mediterranean to rainy England.

The shoot was done COVID-19 securely and elopements are perfect for couples that still would like a beautiful photograph and scene for their wedding day but are worried about the current state of the pandemic. The makeup artist wore appropriate PPE, the shoot was done outdoors, everyone was socially distanced and we limited the on-site suppliers to only six people total (including myself and the two models). 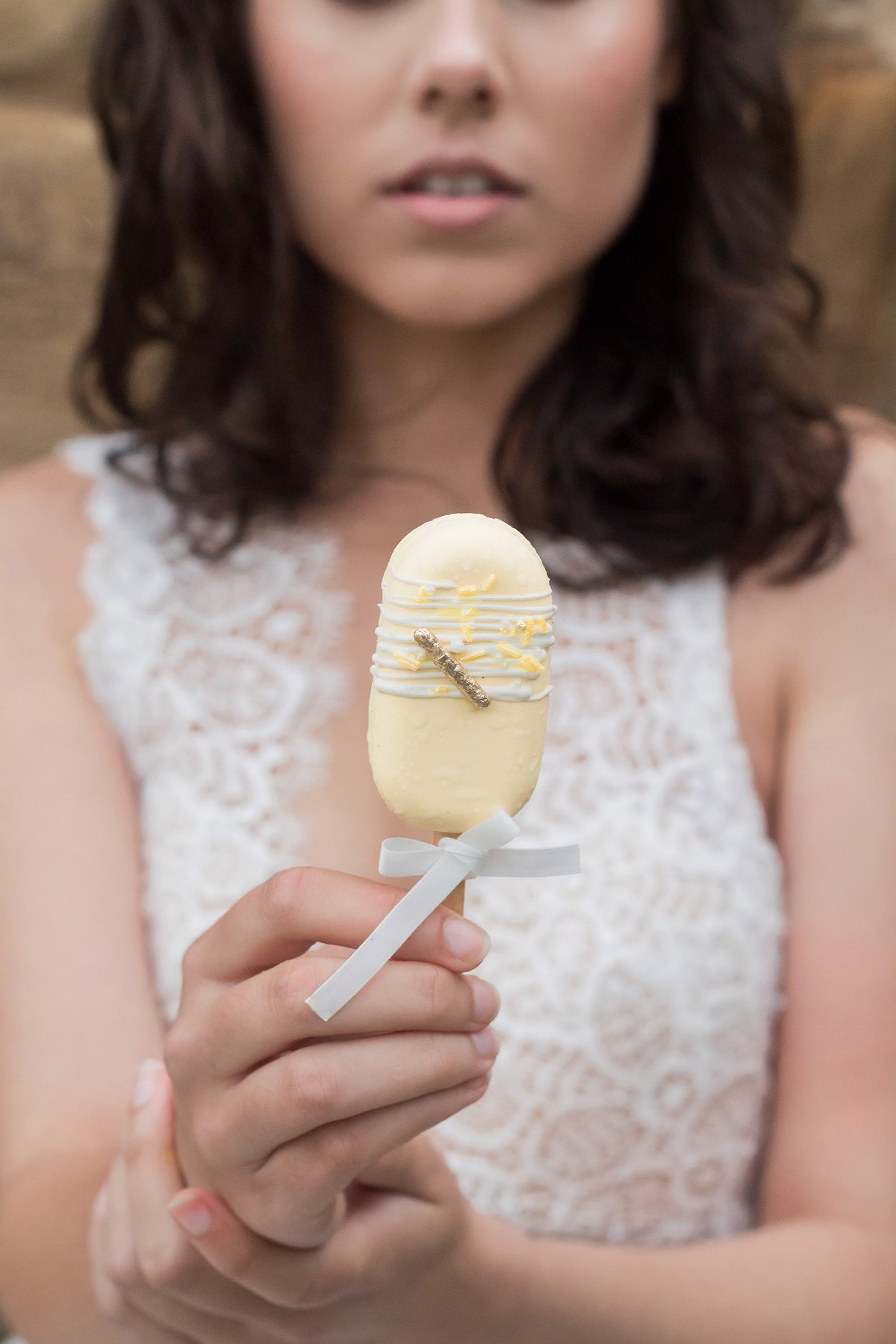 This shoot took place on an extremely windy Friday at Sandal Castle, a hidden gem of Wakefield, where you can have the beautiful view of Wakefield city centre along with Pugneys Country Park’s lakes. The high winds of the day helped create the magical and romantic windswept look to the photos naturally, thanks to Mother Nature.

Sandal Castle was perfect for the shoot because of the beautiful view and the ruins, which reminded me of ruins in Italy. The arches within the ruins reminded me especially of the arches of the Coliseums in Rome. Although wedding ceremonies cannot officially be carried out here, Wakefield Council do welcome any and all couples to come and take photos at their beautiful medieval castle ruins. They also welcome small elopement styled picnics to celebrate. Sandal Castle is also an ideal spot for those romantic golden hour photo sessions and should not be missed! 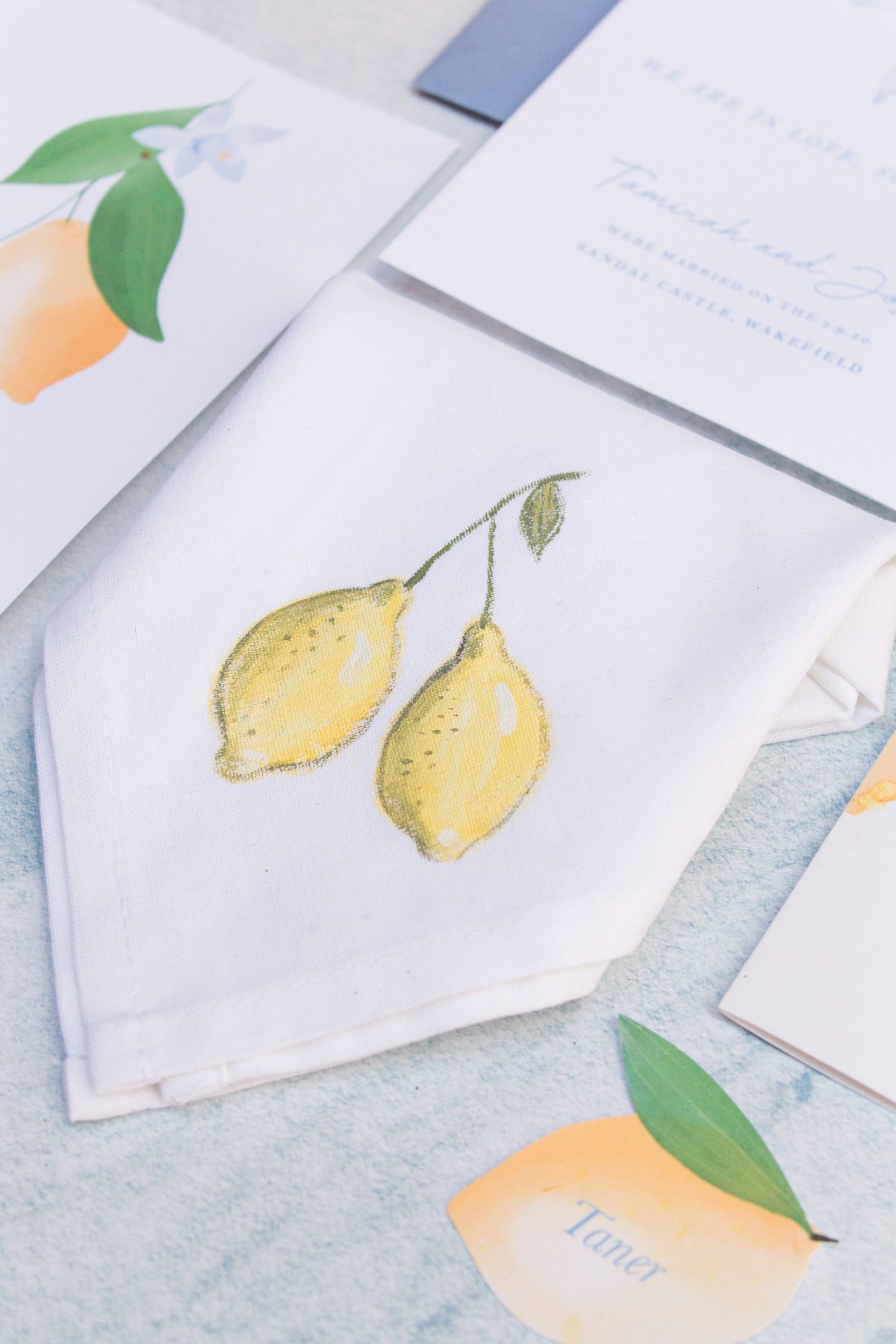 The greenery and florals were all inspired by Italy, using eucalyptus cinerea, olive branches, rosemary, lavender, with pops of yellow from the yellow roses, billy balls, ruscus and more. The florals used are also eco-friendly as they are dried flowers and can be reused. Mae Dae Weddings & Events incorporated lemons, olive oil, and décor matching the lemony Mediterranean theme of the shoot. The stationery, including the adorable place cards and vow books that Letters From Emily designed especially for the shoot featured shades of blues and yellow to match. Pink Peppercorn Cakes also followed suit and created her sweet treats based on the colour scheme as well as adding a touch of lemon flavoured treats. Everything that these suppliers provided for the shoot really came together and all looked very cohesive. 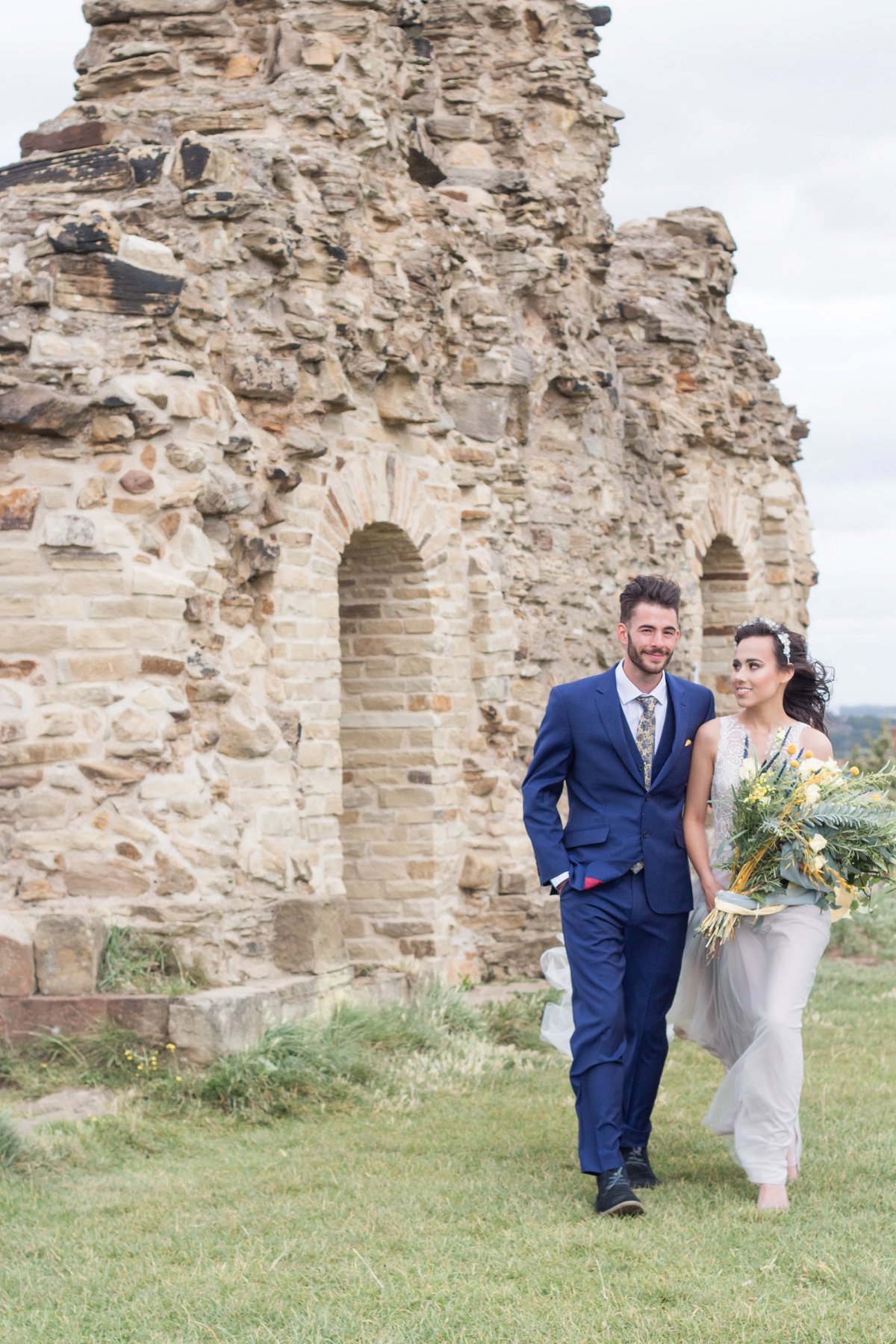 The dress from Bridal Reloved by Willowby By Watters was absolutely perfect for the shoot. I wanted something that can flow in the wind, lightweight, and delicate as that would be the type of dress that you would want to wear in the warm breezy temperatures of the Mediterranean. I know it can be quite windy at Sandal Castle due to the high aptitude so I wanted to take advantage of the winds for the magical flowing dress look (we just didn’t know it was going to be a particularly strong windy day!). I also love the romantic feels that the delicate lace nude illusion of the top of the dress brings.

The headpieces from 1940 Bridal were also carefully selected to match this dress and the theme of the shoot. The Edelweiss headpiece (the blue, yellow, and white floral headband) matched the colour scheme and the delicate romantic look of the shoot perfectly and the Becca headpiece (gold headband) provided the Greek/Roman Goddess vibes and elevated the look in an elegant way. The suit from Slaters Menswear by Ted Baker also followed the colour scheme of blues with a pop of yellow and it was a perfect fit for Mark. The yellow and blue floral tie went really well with the buttonhole that Liz made and added a bit more fun to the look.

When Kaya picked up a brush and started painting Tamirah’s beautiful face, she did not have any particular style in my mind. As the theme colours were blue and yellow, she really wanted to incorporate that into makeup. For Kaya the most important part of the makeup is the skin – it has to be flawless, then the whole makeup comes together. Therefore, she made sure the bride’s skin was perfect for the shoot, and especially for those close up portraits. As for the eyes, I told her that I trusted her artistry and she let her imagination run freely on this look. Kaya chose taupe colours to compliment the bride’s gorgeous eyes and a hint of yellow to bring together with the wedding theme. As this was the hour of creativity, Kaya wanted the makeup to be eye catching, she then complimented the eye look with Swarovski crystals to make them pop and sparkle – because let’s face it, who doesn’t like a little bling?!

This makeup look is a creative bridal look and it would suit any bride that would like to stand out from the classic crowd.

The shoot started out bright and early and a bit hectic as the original suit supplier for Mark fell through. However, after speaking to Sean from Slaters Menswear, he was kind enough to step in at the last minute to lend us a suit for the shoot. After sorting the suit, the makeup process was smooth sailing until it was done and we changed to get to Sandal Castle and that was when the weather hit us… literally.

The strong bursts of wind were extremely worrying, as it would blow away the entire setup. Liz and I debated and thought, since we were there, we might as well try and do the shoot after all the postponements due to rain. So we did it. While Liz fought the wind to set up, Tamirah, Mark, and I fought the wind to photograph them without their hair blowing in their face due to the wind. There was quite a bit of stumbling as well when the huge gusts of winds would hit, but wind was only the first element that challenged us on the day. BBC weather failed me when they had forecasted that it was going to be partly cloudy with high winds but no rain. Well, the rain definitely came, on and off throughout the shoot. This was a Mediterranean inspired shoot, where it is known for the beautiful sunshine weather, so the rain was definitely not welcomed, but again we pushed through.

Our aim was to bring the warmth of the Mediterranean to Wakefield and, during the shoot the weather was the complete opposite, However, after editing the photos, I think we really achieved the Mediterranean vibes despite the actual weather challenges of the day. I’m honestly so proud and grateful that the team managed to push through and we managed to achieve such a beautiful shoot on such a day. The highlights was definitely laughing and joking about the wind and rain, and then finally saying, “that’s a wrap!” at the end of the shoot! Sending out the sneak peeks to all the suppliers was also a personal highlight of mine, as they were so surprised that the nasty weather was not apparent in the photos and it actually even looked that the wind was in our favour with the romantic flow of the dress in the wind. 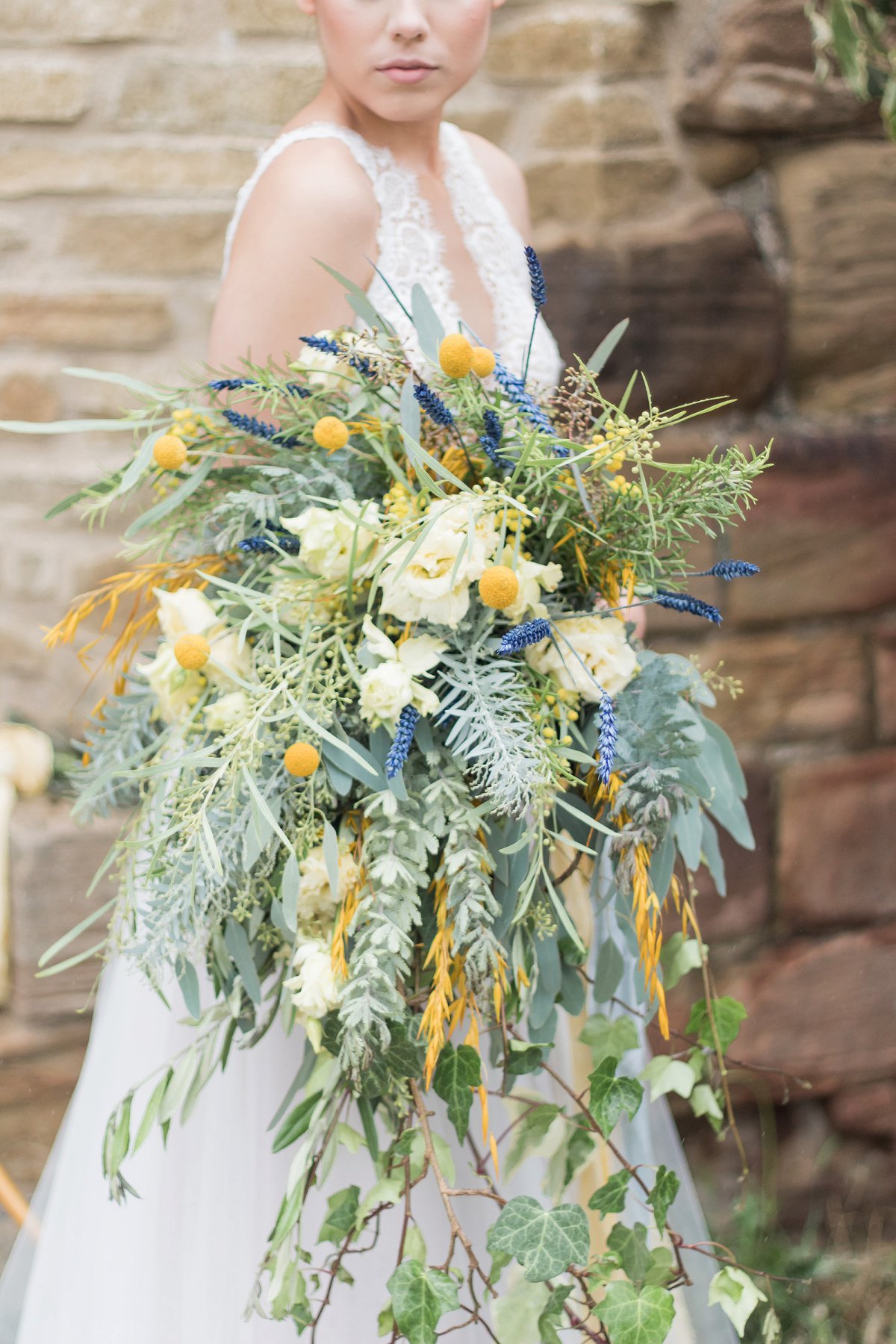