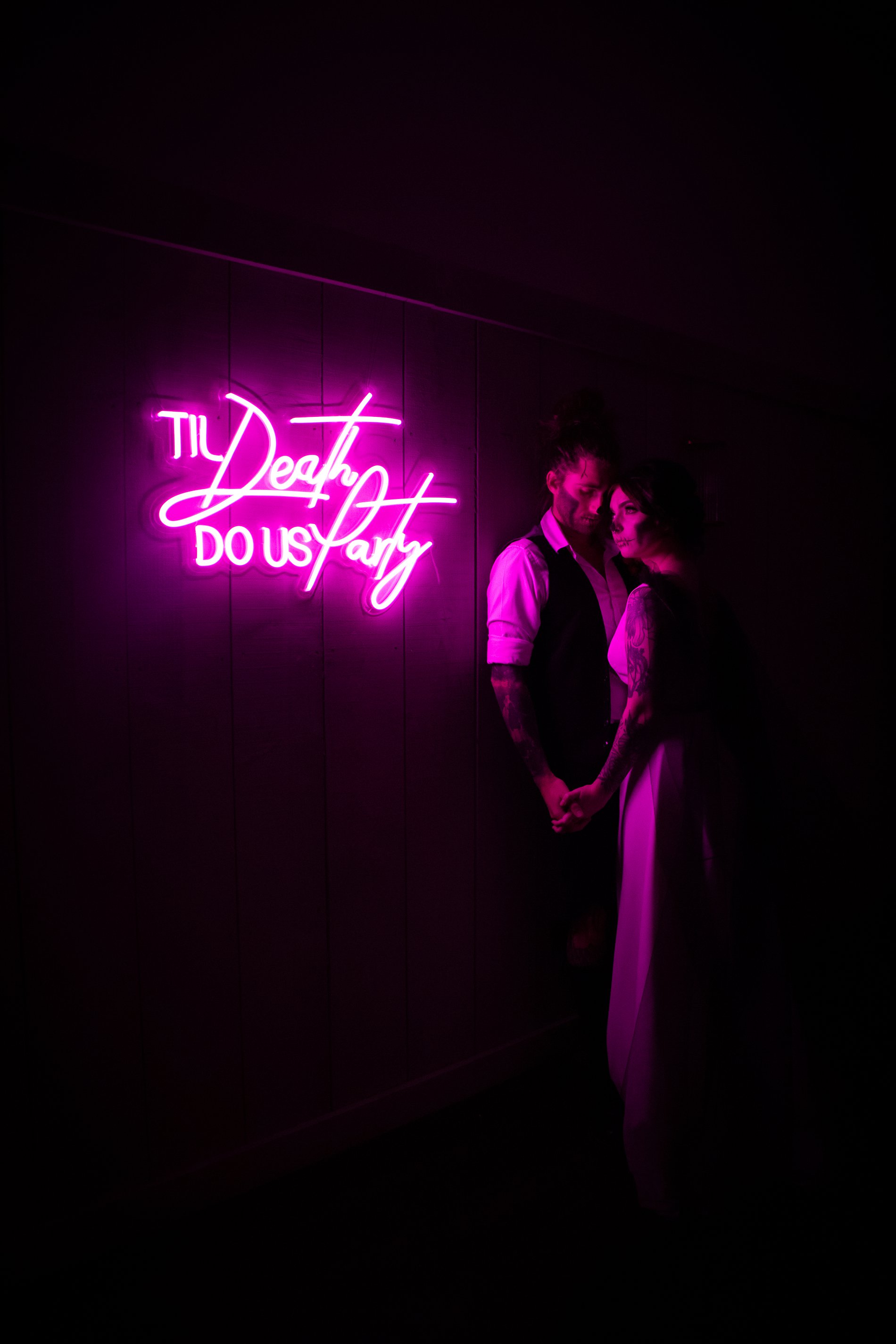 The current dark times for the wedding industry have inspired this group of suppliers and they’ve created a stunning gothic shoot for your viewing pleasure, but with a bright shock of colour to capture that party spirit.

Babes, if you’re craving something dark and edgy but not sure how to keep it upbeat and celebratory for your happy day, we’ve got just the thing for you. Bronte Bespoke Events and their chosen team of local suppliers have conceived and created a crazy-cool styled shoot in a barn that’ll get your pulse racing.

You’ll spot the huge bouquet of flowers providing a mega pop of colour, welcome through the darkness, coupled with the gothic design of the stationery and the creative aspect, just perfect for this time of year.

Let’s speak to the experts and get all the fabulous details for you to get cracking on your own party planning. 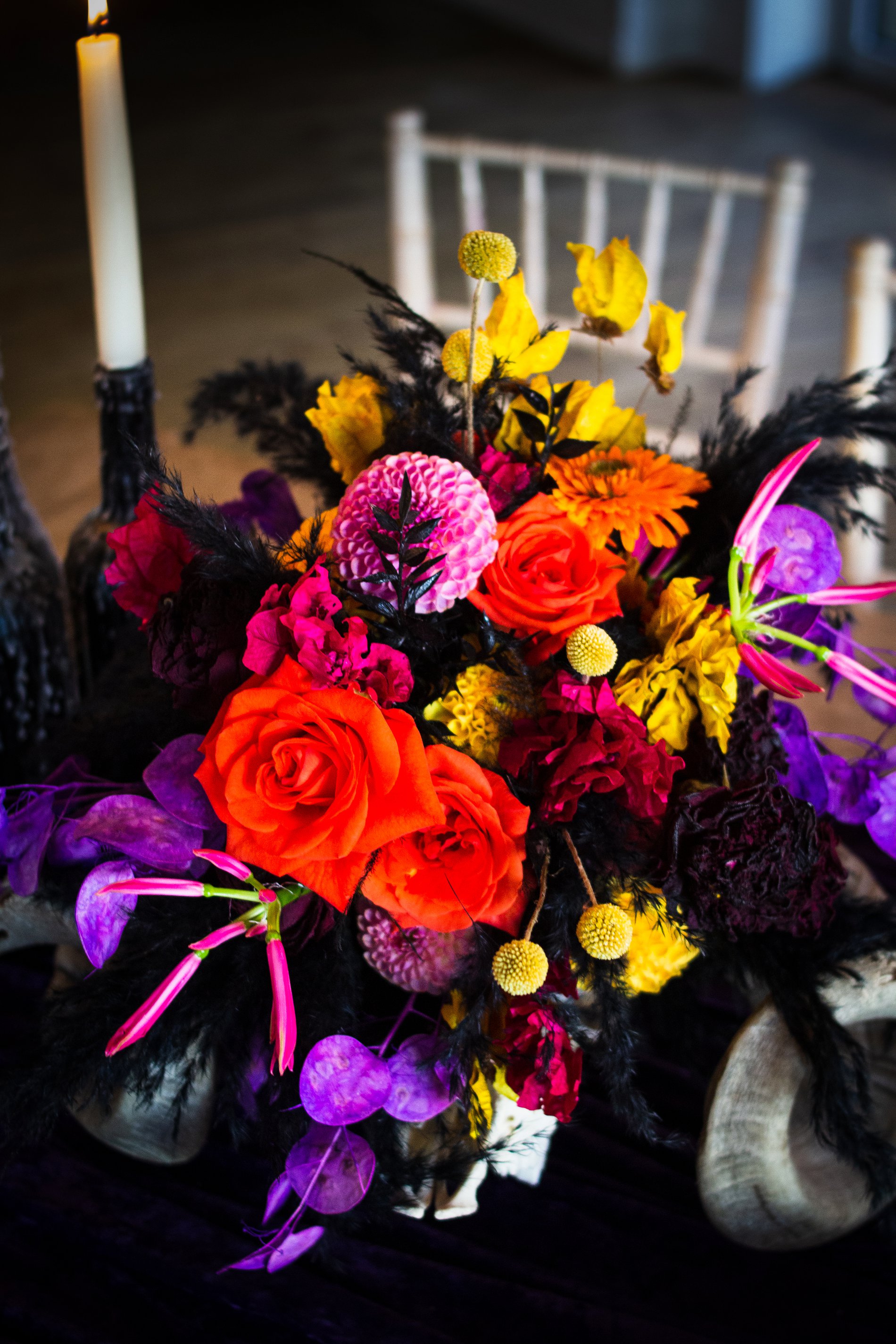 Bronte Bespoke Events says: Our shoot had a gothic brights theme.  I wanted to bring a group of very creative individuals together, give them an opportunity to have a bit of fun and to do something different to the norm. Halloween is the perfect time of year to go wild and have a bit of fun, with the bright colours added in to really lift things in a rather dark time. 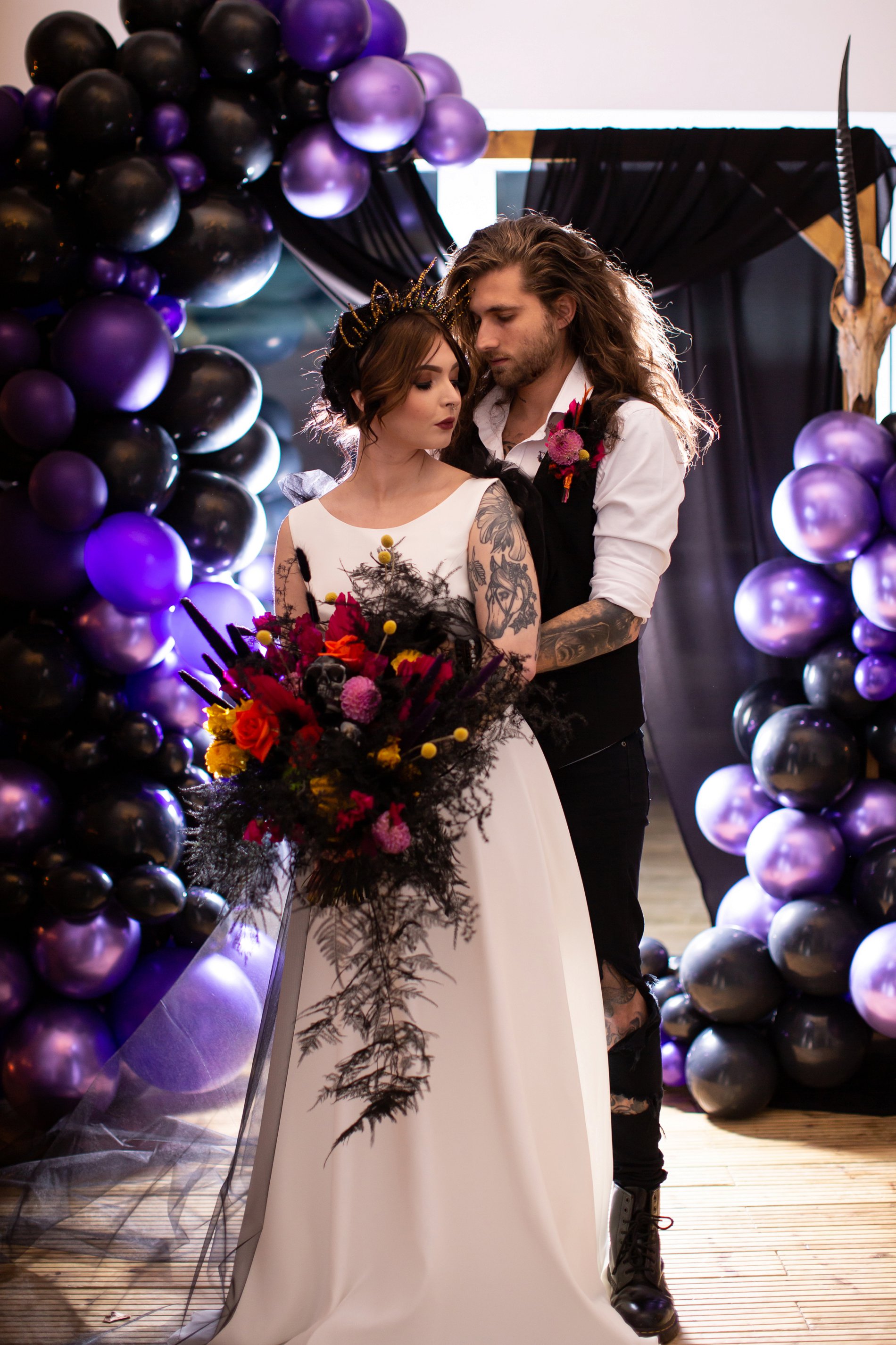 Bashall Barn is a beautiful countryside venue, it has the most amazing outdoor spaces and a very flexible interior, meaning we could really play with lighting, contrast and setups to create some very dark spaces as well as lighter spaces. This enabled us to photograph smaller details which would have been lost against a dark backdrop. 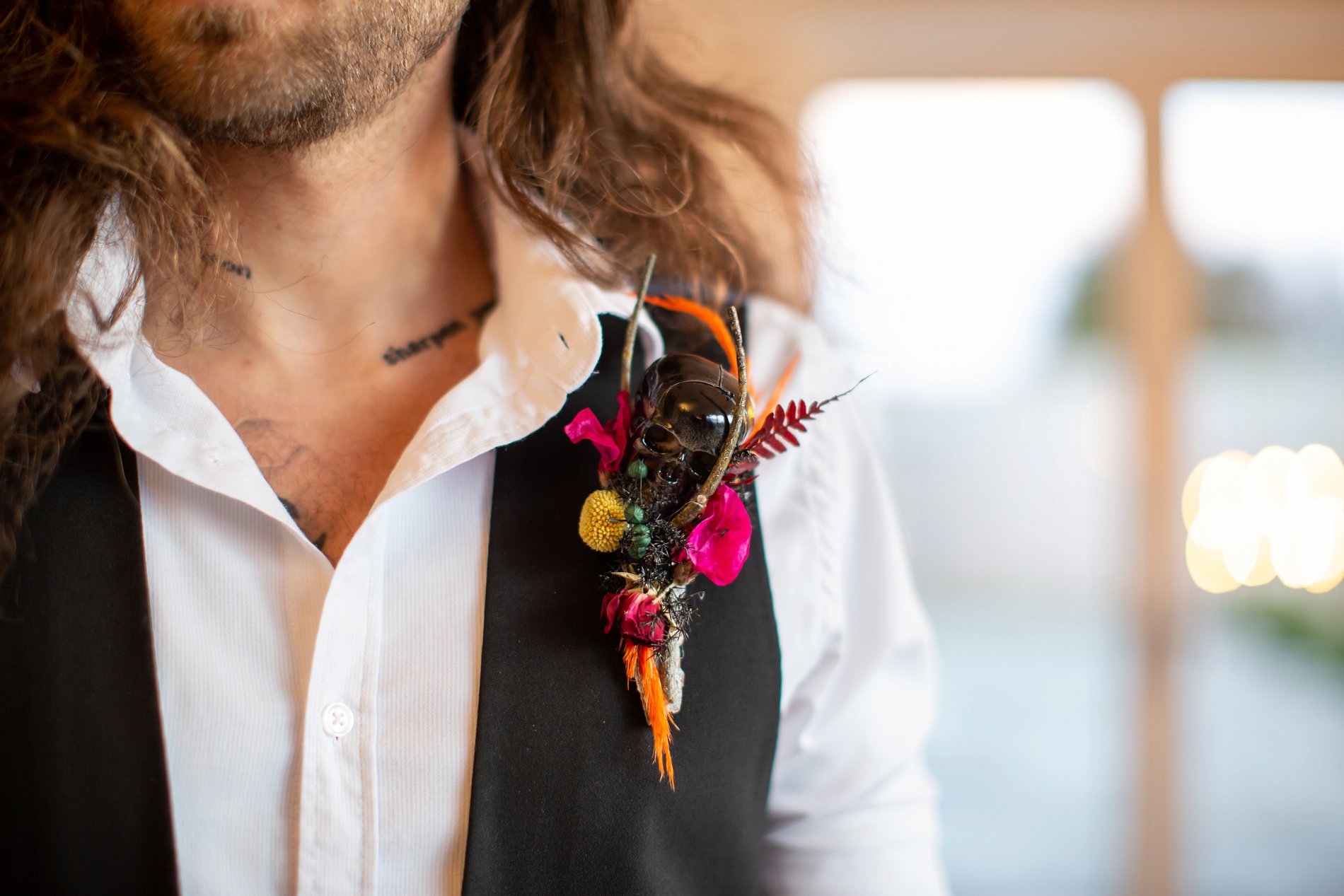 I created a few focal points; a ceremony backdrop that had balloons by Balloonsmith, draping and a beautiful antelope skull from Dog Skulls and Skeletons. A dressed table, using velvet in dark green and purple to bring texture, bottles with dripping wax and skulls, with the place settings highlighted with colour pop napkin ties from Lulabelle and Moo. A piano covered in candles and neons by The Creative Events Group all fitted in with the dark and moody base colours but with these bright pops of colour really stood out and caught the eye. The cake by Sweetest Thing Cakery and the flowers from The Flower Shop followed the same brief. Stationery was by Prim and Glad Bespoke Wedding Stationery and Sun Kissed Ceremonies was our celebrant on the day. 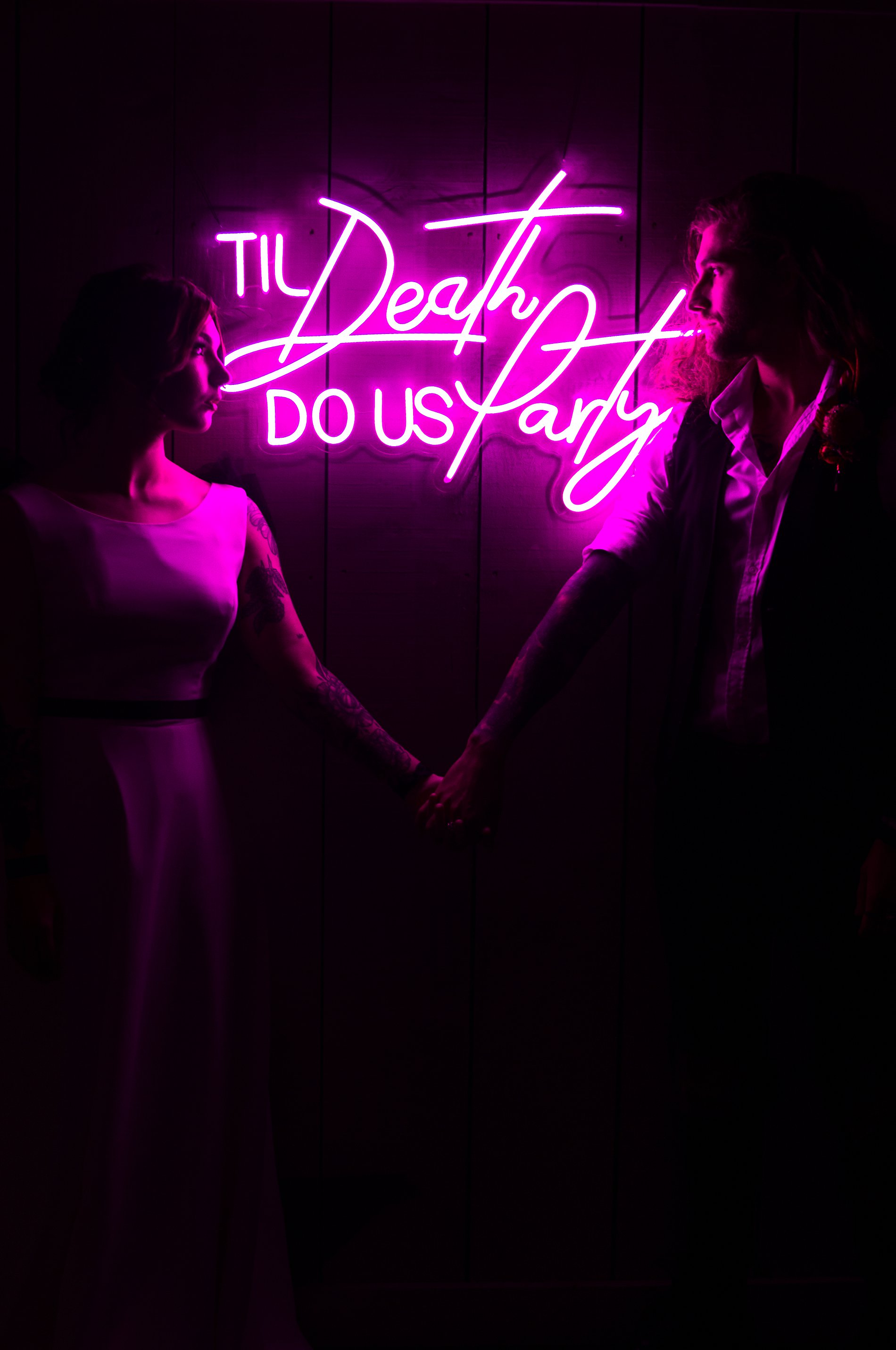 I decided to keep the clothing quite simple, because there was a lot going on in other features, we didn’t want the models to be lost amongst the mass, with people not knowing where to look first. We stuck with the dark and edgy feel for the male model, making a statement with his long hair and tattoos. Then with the two female models, we chose simple dresses from Lottie’s Bridal Boutique but added in details like a black veil cape to tie in with the theme. We also had some amazing hair accessories and headpieces from Rachel Chaprunne, Vintage Adornments and UNVEILED Network Member Silver Sixpence In Her Shoe.

The makeup was something I decided to have a little fun with, starting with natural skin and dark smokey eyes on both models, one with a colour pop lip, then adding in some skeletal details to enhance the Halloween theme. I didn’t want the full shoot to have the skeletal makeup, I wanted to show how the dark and moody look could be achieved with more typical make up choices too, seen as that would be the look that would more usually appeal to brides.

With hair I decided to go with two looks that were quite flexible and so could be played with as we went along, allowing for the use of various accessories. I would describe both looks as quite modern bridal choices, again this was an area where we were able to play with the ‘normal’ choices a bit, but without getting too crazy and making it unrelatable for a bride. Hair by Charlotte Riley and Glamm by Sam both did a great job. 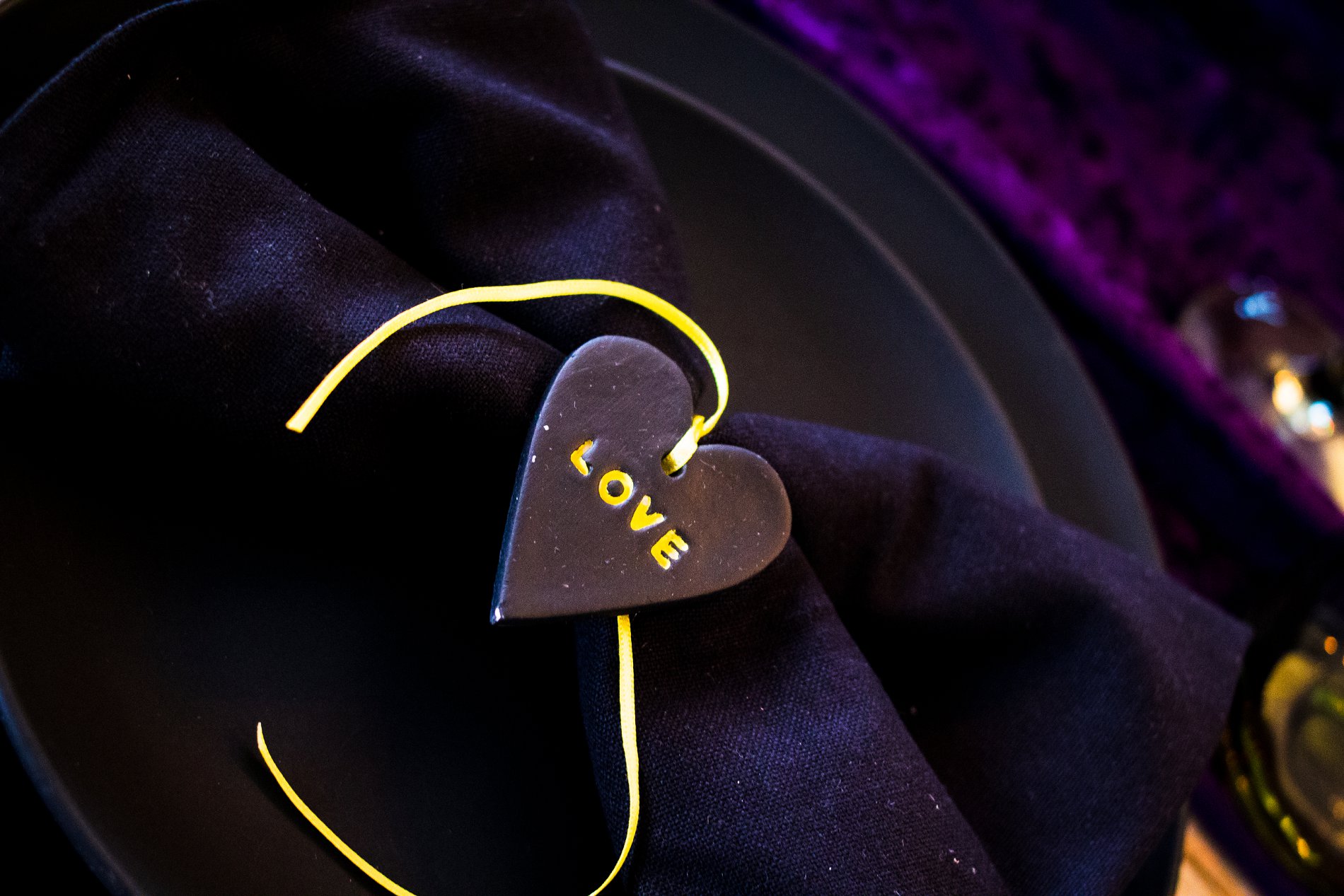 Though in the run up, the shoot often felt like it was never going to happen, as soon as we got people together on the day, ideas started flowing and people brought their own influences, which really made things come alive. It would have been great to be able to spend a little more time outside but the weather had other ideas, unfortunately that is something we can do very little about! We came away from the shoot with some amazing images. Suppliers have been really happy with the way their individual pieces were portrayed whilst still keeping the theme as a whole and not looking disjointed. I think on the whole it worked brilliantly and the unexpected changes along the way were ultimately for the best.

Shooting the models in the dark using only the light of the neon to highlight was something that I wasn’t really sure would work but ended up being one of the best parts, the ceremony backdrop was also something that was a bit of a risky choice, with the balloons, but again they photographed so well in the dark with just focused light, they went from being a part that I wasn’t convinced about to a feature I was really pleased with.

I know I have said it already, but for me a massive part of this shoot was about bringing suppliers together and letting them really expressive their creativity in a different way. These are dark times, especially in the wedding industry, and it was brilliant to have an excuse to get together with likeminded people and basically just have a play with some really funky ideas.

I still wanted to create something that would really capture a bride’s imagination. I understand that it might not be a wedding choice for most but for me it was as much about showing possibilities and getting people talking as ideas for a real wedding. We do a lot of more typical shoots and this was an excuse to do something different that really made us all smile!

It is so important to me to keep the positive relationships with fellow suppliers thriving, keep a light on the wedding industry and keep showing people that we are still here and we can still do amazing things in these dark times.