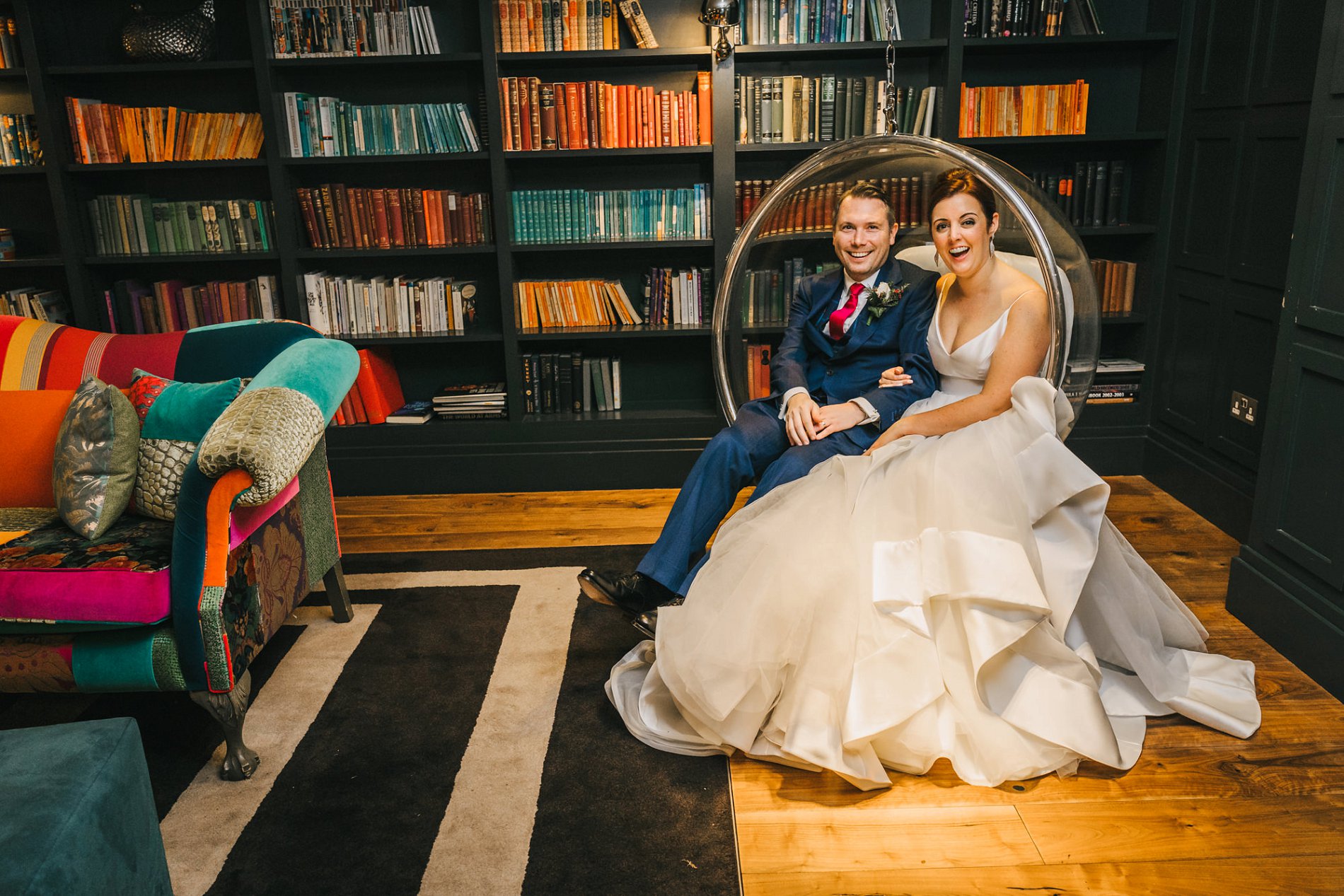 Today’s gorgeous wedding is everything we love about micro weddings and shows how, in the midst of a pandemic, couples can still follow their heart and say ‘I do’, no matter what.

Set at the exquisite Rudding Park, this Harrogate venue was the perfect backdrop to Kelly and Tom’s special day, and the couple couldn’t fault the attentive service they received under such challenging circumstances.

It may have been smaller than the wedding they had originally planned, but the beautiful styling elements were all still carefully thought out. The blooms, the tartan shawl and face masks as a nod to Kelly’s heritage, the groom’s fun jacket lining (we won’t spoil it for you just yet!) and the creation of a heirloom – a lovingly handmade ring pillow that uses fabric from the mother-of-the-bride’s very own wedding dress – everything was so personal to the couple.

Kelly called this wedding ‘version 3.4 – the Tinderella story’ as it was the fourth iteration of the couple’s third date. But we think the pair pulled off something truly intimate and bonny, as they would say in Scotland, surrounded by their nearest and dearest. What more could you want from your special day?

With images by Amy Jordison Photography 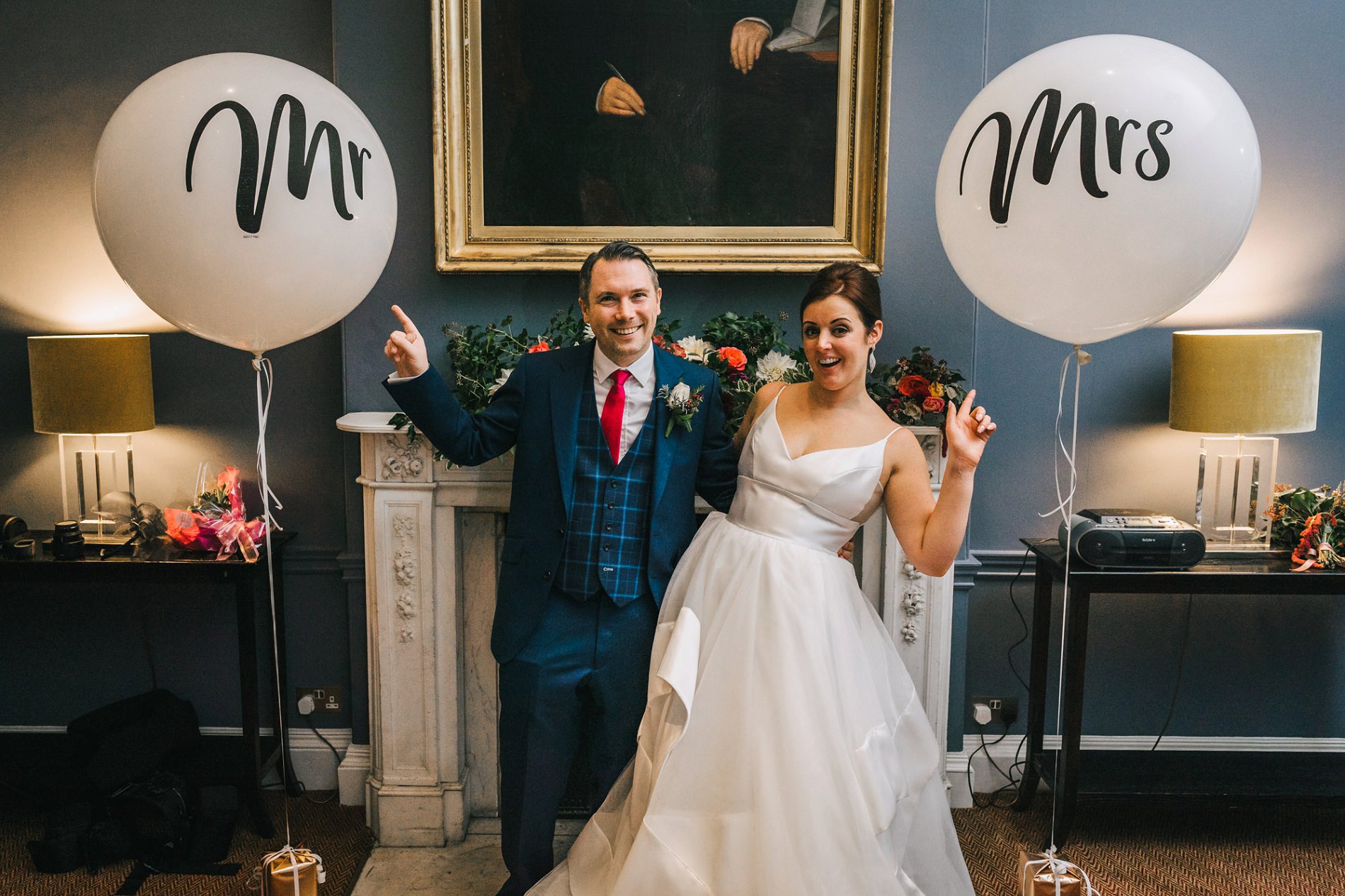 Kelly says: We went on a trip to Vietnam and Singapore, and Tom carried the ring in and out of four airports without me knowing. We had planned to go to the music and light show at Gardens by the Bay in Singapore, as we’d heard it was amazing. Tom was really eager to go on our first night (I couldn’t understand why!) and told me we had a restaurant booked nearby that night so it was a good idea.

We got there, found a quiet spot and then the show started, with the trees lighting up in different colours, as if they were dancing to music. About half way through the show ‘you are the one that I want’ from Grease was playing and I started dancing. Tom put his arm around me, which I thought was him telling me to stop dancing, then got down on one knee, took a ring box out of his sock and proposed with the perfect ring – a diamond with pink sapphires. Our hotel room overlooked the place where we got engaged, so we spent the rest of the trip looking over and reliving the moment. 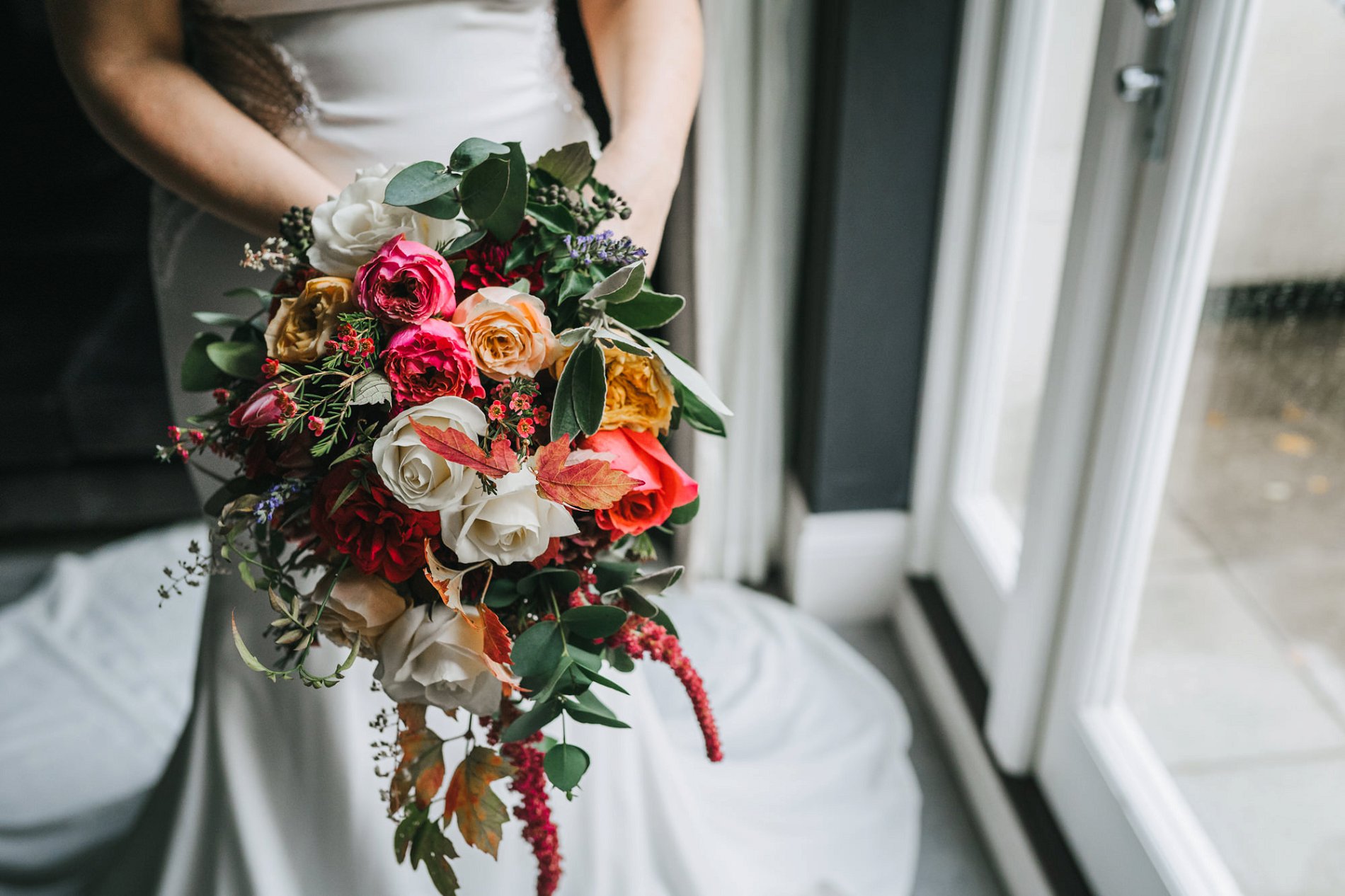 We were supposed to tie the knot in August 2020 with 100 guests, then rearranged to 5 December with 30 people, and when the numbers were reduced to 15 – we cancelled completely.

After a few weeks, we were most upset about being unable to make our vows and commitment to each other. I looked in my diary and remembered that 29 October 2020 would be three years to the day since we first met, after matching on Tinder. The rollercoaster did not quite end there, as there were rumours of another lockdown, so I insisted that no one – apart from our parents and sisters – knew about the wedding.

We were offered two time slots for the ceremony by the registrars – 12 noon or 4pm. We felt that noon was too early when there were so few guests, so we took the 4pm option. Three days before our ceremony, Tom pointed out that the exact time we met was 4pm – it could not have been more perfect for us.

We got married at Rudding Park, Harrogate. As soon as we started looking around, we could both instantly imagine saying ‘I do’ there and knew this was the place for us. They could offer so many different extras, and were able to adapt to suit our individual requests.

It would have been perfect for the larger wedding we originally planned, but the flexibility they offer was ideal for a micro wedding like ours. We were delighted with our choice, as they went above and beyond at all times to make it a really special, happy, fun-filled day. 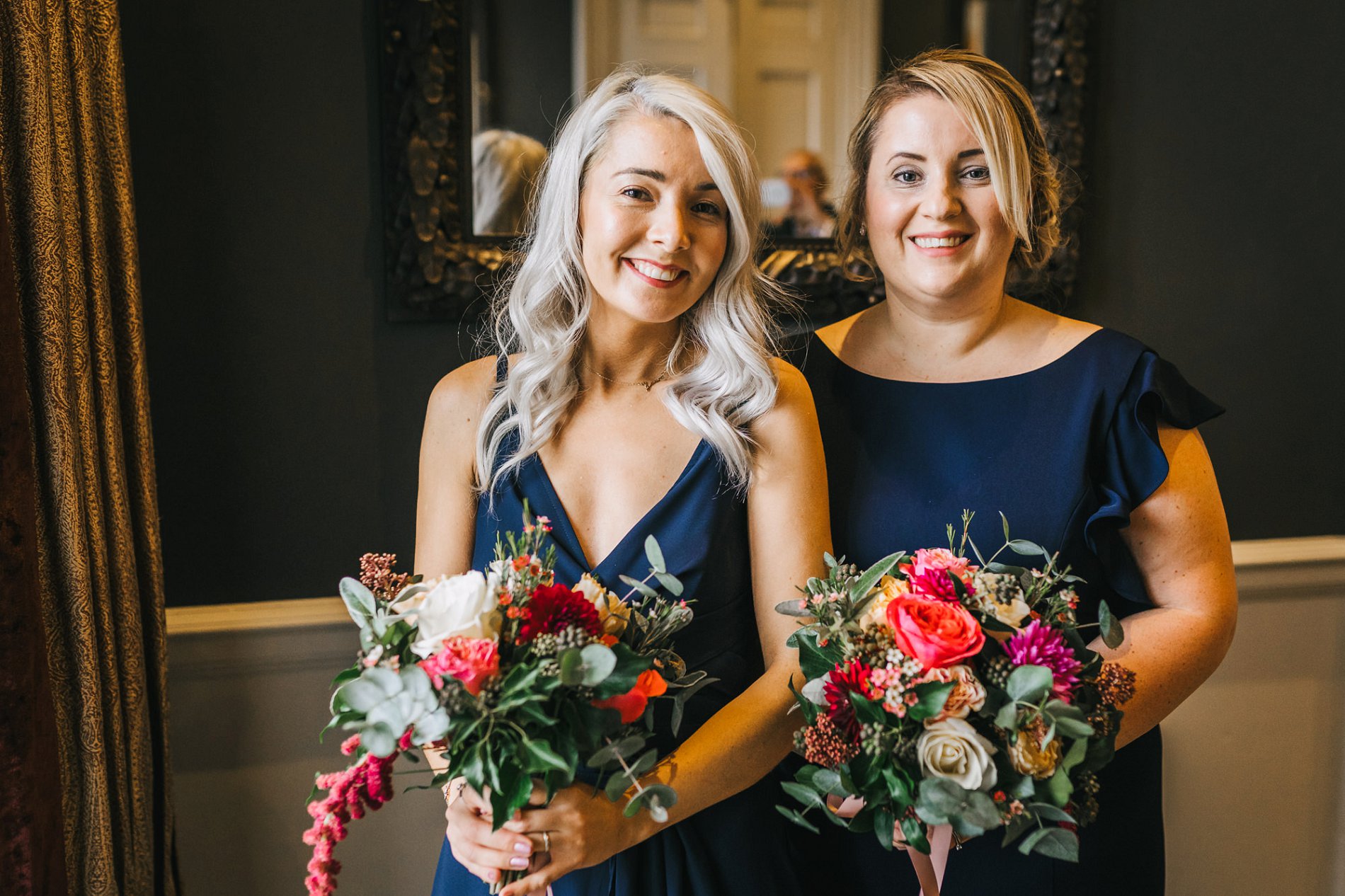 My maiden name is Anderson, with both sets of grandparents on my side Scottish, so I had an Anderson tartan shawl and I got my parents matching facemasks, so when my dad walked me down the aisle he would look smart! We also tied it into the colours of the venue to complement the surroundings. 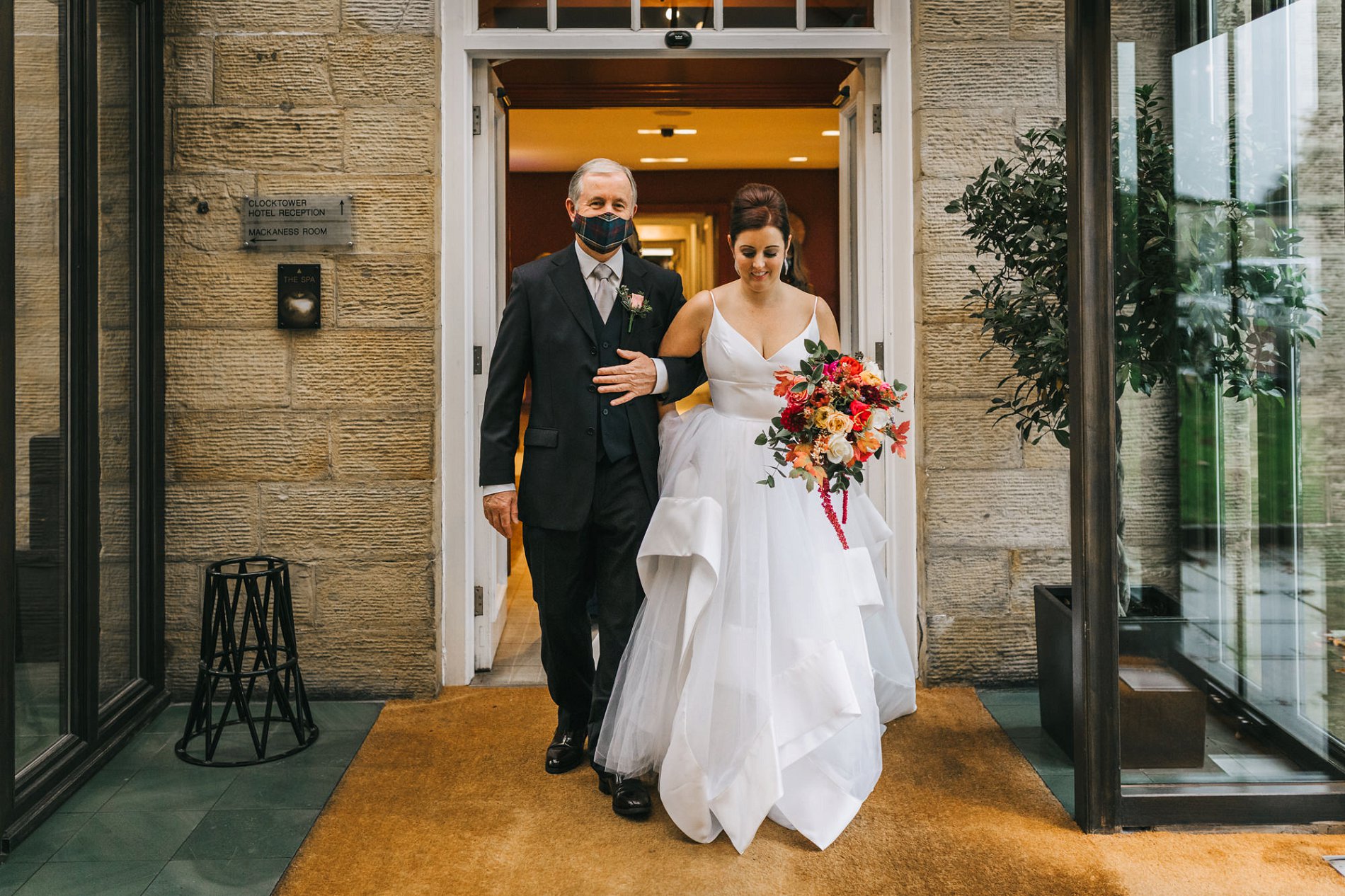 I chose the Andi dress by Hayley Paige from UNVEILED Network Member Epernay Bridal in Gosforth, Newcastle. When I put it on, I literally thought ‘I need to petition my local Tesco to have an evening each week where you can shop and wear your wedding dress to make sure I can wear it loads’!

The co-owners, Judith and Laurie, were an absolute dream – they took the time to understand what I was like as a person, what I thought I wanted, and what the venue was like. They recommended the Andi dress – I would never have tried in on otherwise, if they hadn’t insisted!

Tom wore a bespoke tailored suit from Mullen & Mullen in York. We picked the cloth for the suit relatively quickly and the team were brilliant with helping us choose what would look great on camera and for the time of year. We then looked at the lining materials which is what took some time! There were hundreds, from super sensible to really quirky. Tom chose the fun car lining, as F1 is a passion for him, and let’s face it – I doubt he will have a custom-made suit again!

We didn’t have any groomsmen, due to the rush to get married. 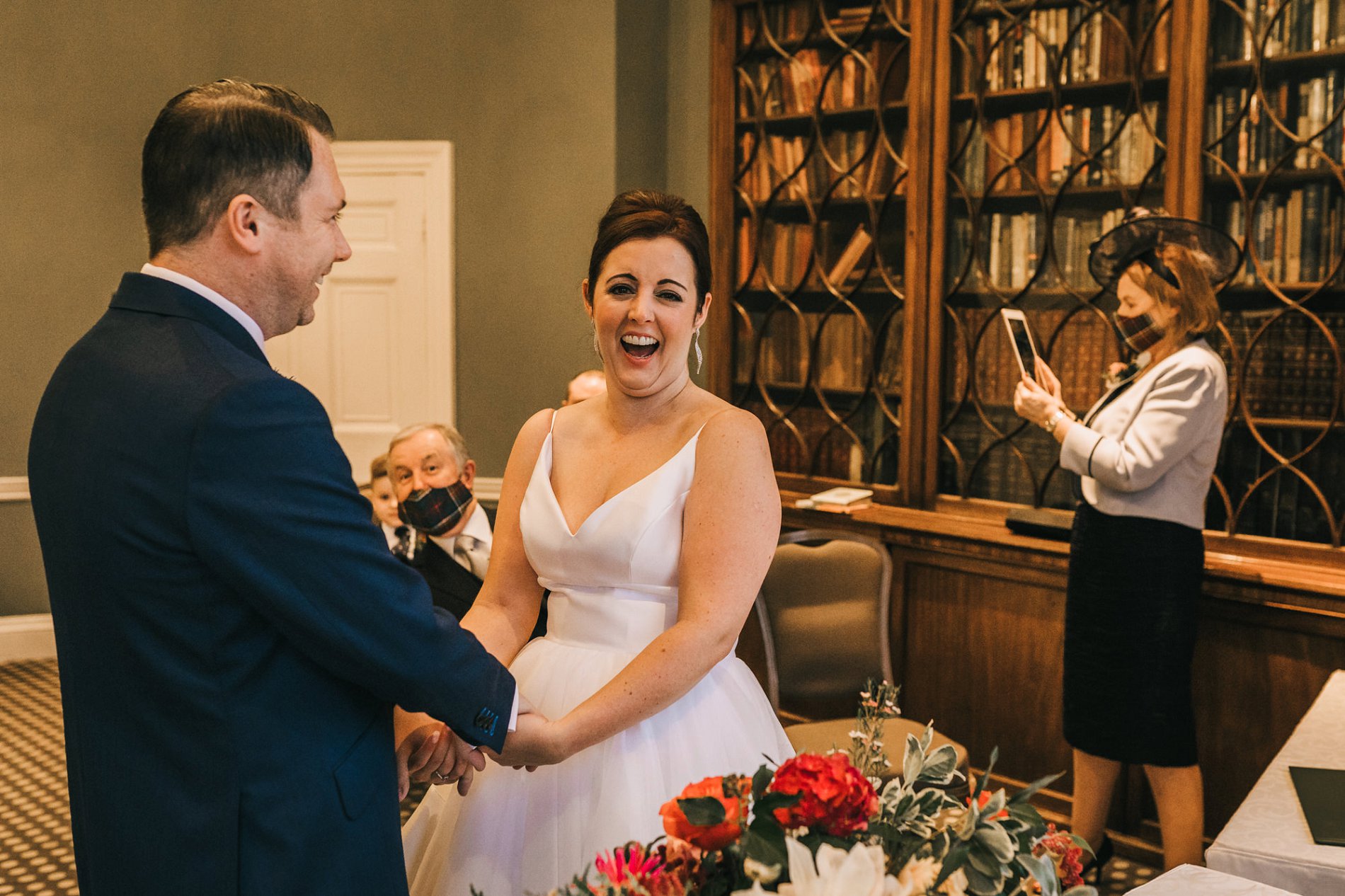 I nearly didn’t have bridesmaids as there were so few guests, but I wanted my sister and new sister-in-law to be included. As we didn’t have much time, I chose navy blue and then quickly sourced their dresses.

Hair was by Lisa Holmes and makeup was Julie Mercia, both from York. They were fabulous, professional and very calming to have around on the morning of the wedding. 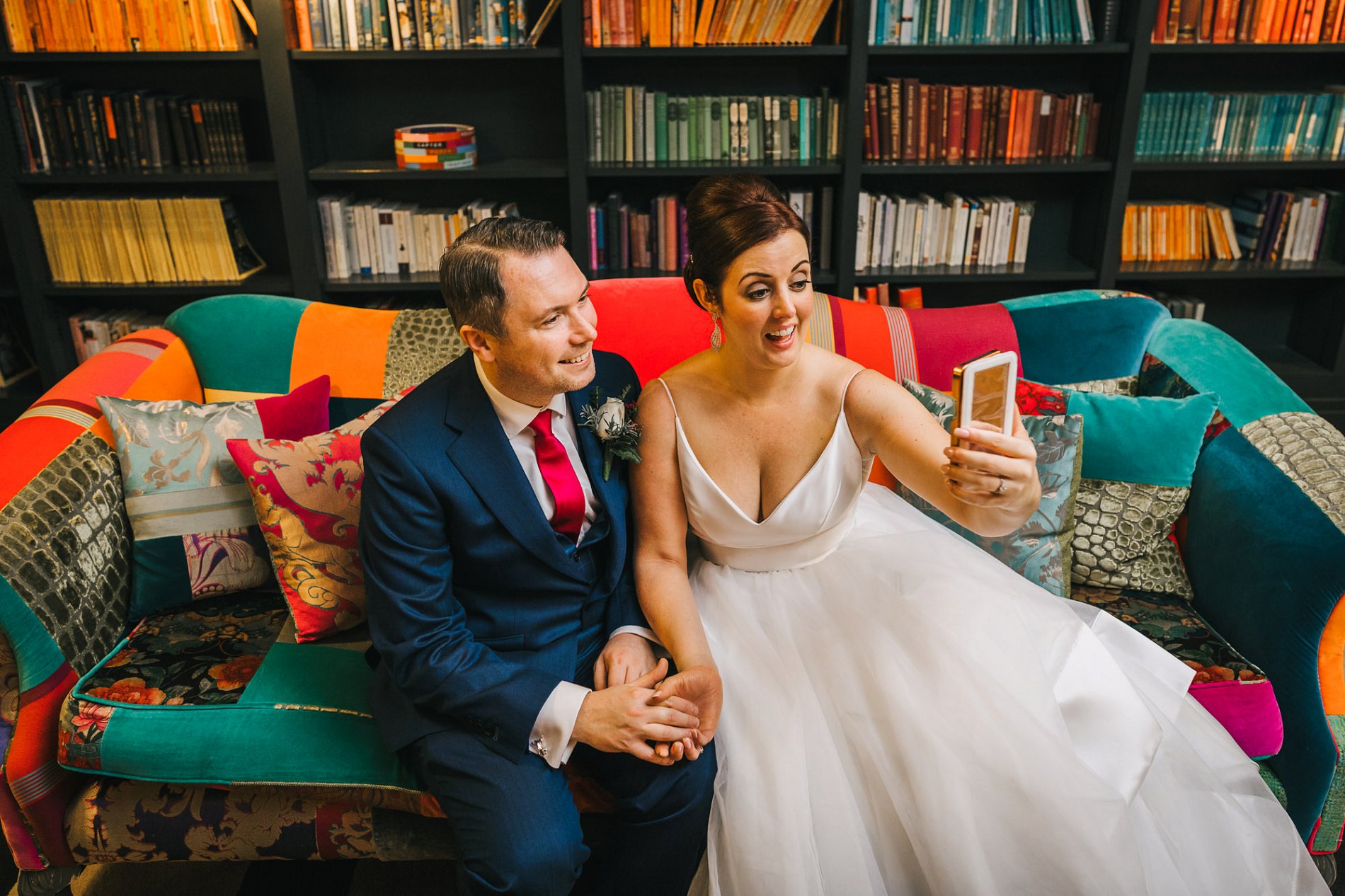 Amy Jordison captured our day. I am not at ease in front of the camera, and staged photos were not my preference, so I was looking for someone who I felt comfortable with, and Amy was recommended by two of my friends. I checked out her website and it was exactly what I wanted: relaxed but stunning photos.

Amy was a sheer pleasure – she has such a warm, friendly and personable style. She listened to our story and what we wanted, and really got to know us. That translated into pictures we didn’t even know we wanted!

When we received our highlight photos – I cried! She managed to capture all the subtle nuances of our emotions throughout it all, and you can just see the absolute joy radiating from us in all the pictures.

Apparently, it rained all day too – I say apparently as I had no idea! I was so swept up in all the excitement that I didn’t look outside once, and Amy found great places indoors for our photographs, so it didn’t matter that we couldn’t get any taken in the grounds at Rudding Park.

We got our first picture before 8am the day after our wedding, which meant we could share this with all the people who couldn’t be there on the day. This really meant a lot and we absolutely cannot thank Amy enough. We’ll treasure our photos forever. 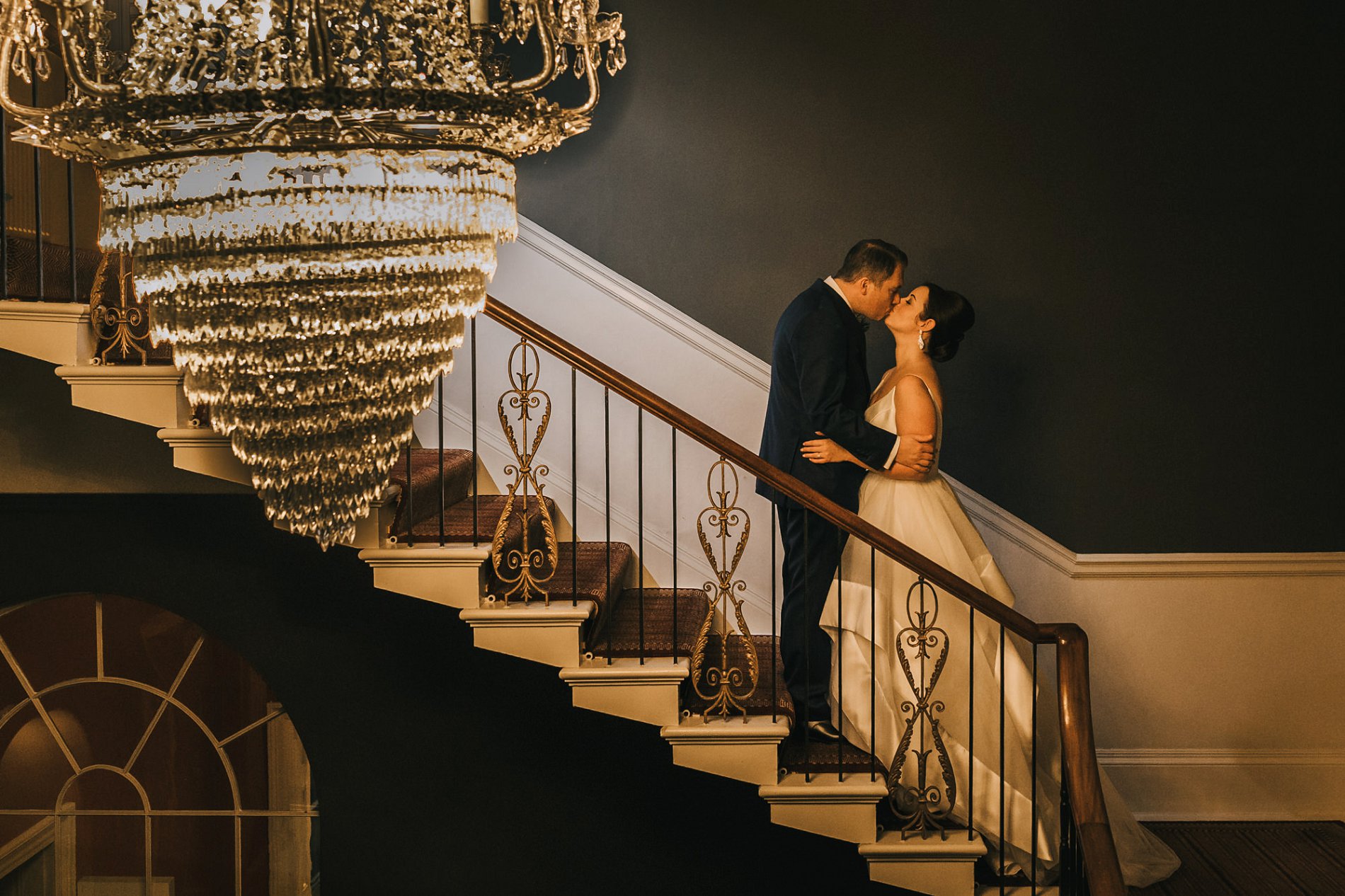 My flowers were supplied by Fiona Hogg Floral Designs in Dunnington. I didn’t realise how gorgeous my flowers were on the day. A few days after the wedding, I was on Insta and a bridal bouquet caught my eye. I thought ‘wow’. It was my florist…then I realised, they were my flowers! I hadn’t appreciated just how gorgeous they really were.

After my wedding, I posted them to a very special friend. I would have literally thrown my bouquet at her, if she had been there on the day. She got home from a really demanding work shift at 2.30am to a box on her doorstep containing my beautiful bouquet, which really cheered her up.

The Mr and Mrs balloons were also from our florist and were such a fun addition – they were HUGE too!

For our favours, we had glasses with everyone’s name printed on, and then little place settings featuring their role in the wedding. 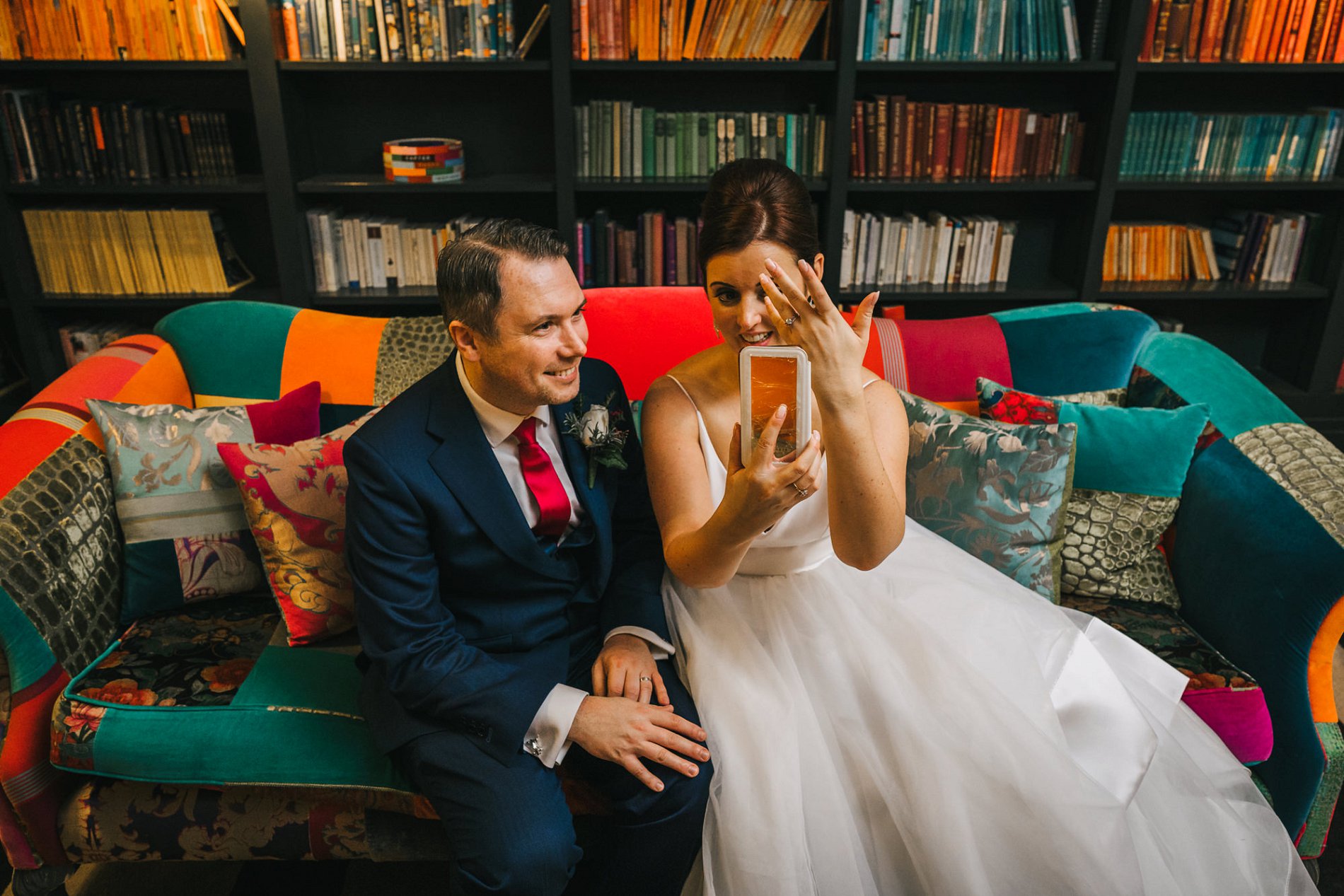 After a lot of cake tasting (surely, the most fun part of wedding planning?) we chose Emily at The Flamingo Bakery in Northallerton. We had a simply iced, two-tier Madagascan vanilla with salted caramel butter cream. The flavour was amazing and not too sweet. The sponge was really light, too.

We enjoyed a food and wine tasting, and then chose our favourites. 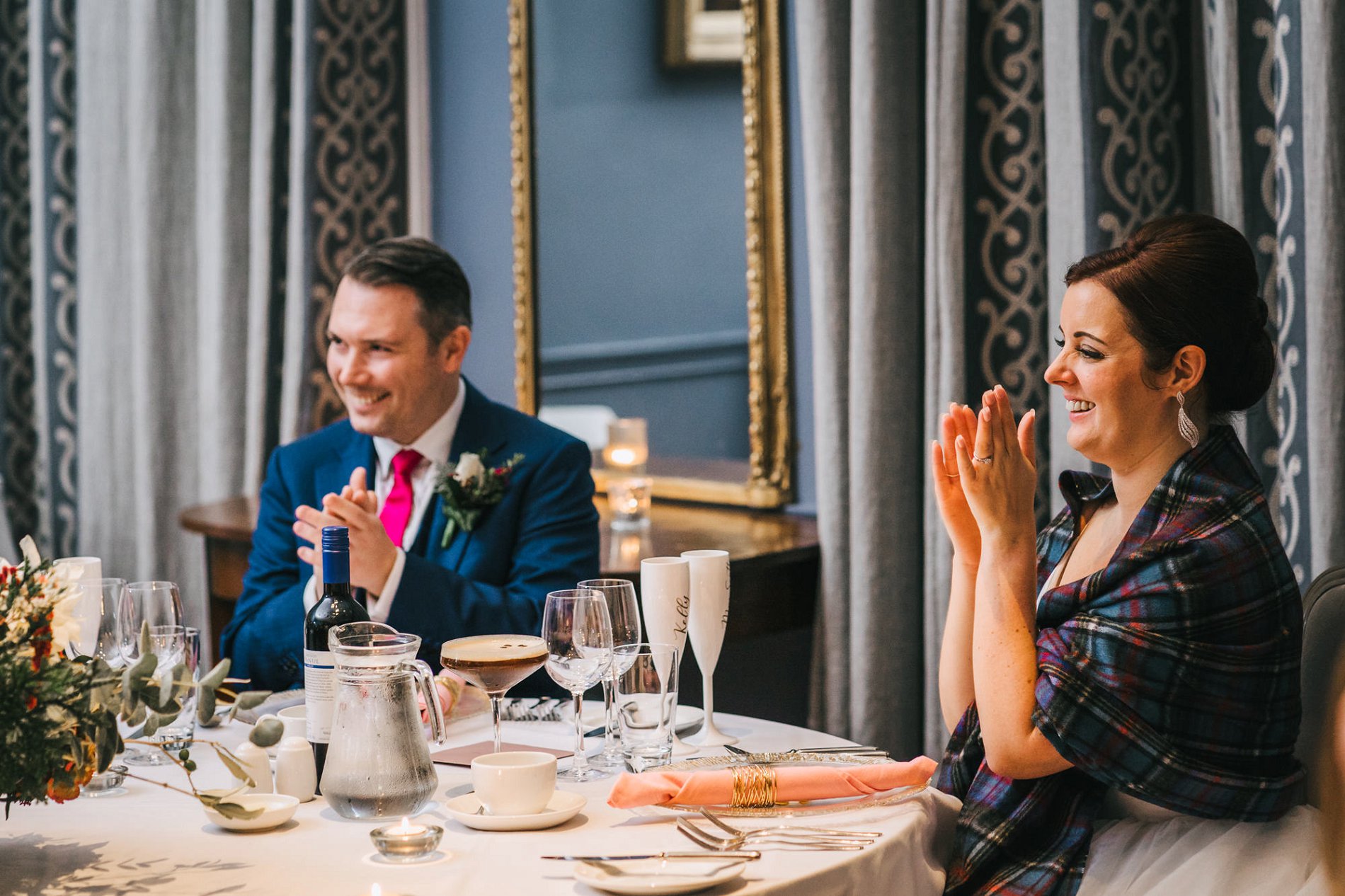 The speeches were our only entertainment. My six-year-old nephew read aloud ‘Guess How Much I Love You’ by Sam McBratney which was an absolute highlight from the day. 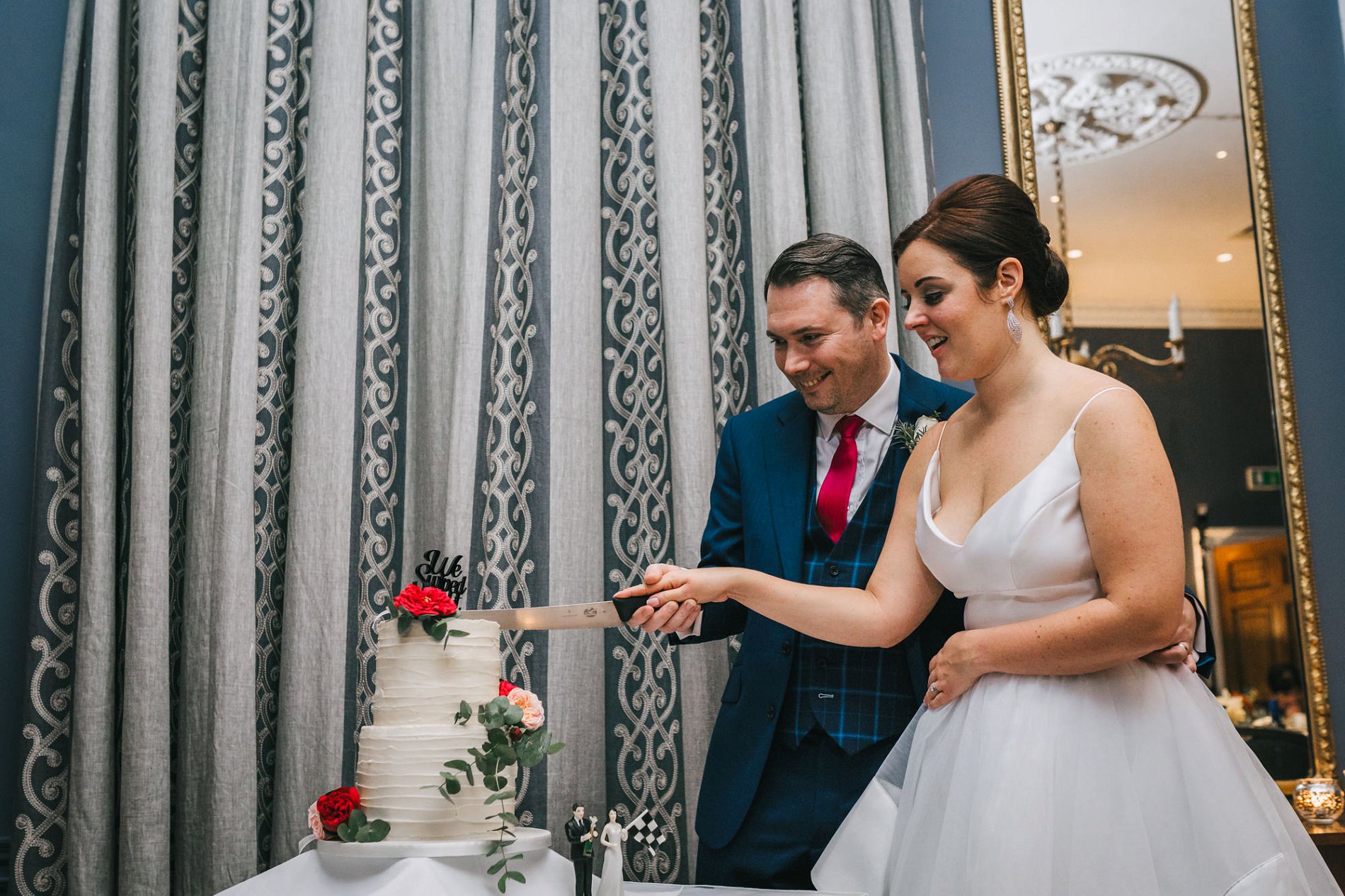 My 84-year-old grandma was unable to travel, but I really wanted to have her included in the day. So, I asked her to make a ring pillow for my nephew to carry down the aisle. She used material from the wedding dress she had made for my mum (her daughter-in-law) on 25 August 1979. And just like that – a family heirloom has been created.

I also had a small pin made for my nephew saying, ‘Today you are our pageboy and have filled our hearts with pride. Here to something old for you to pass on to your bride. 29/10/20’. I had a photo taken of him holding the pin, and have put it in a safe place so when he gets married, his partner has ‘something old’ for their special day. 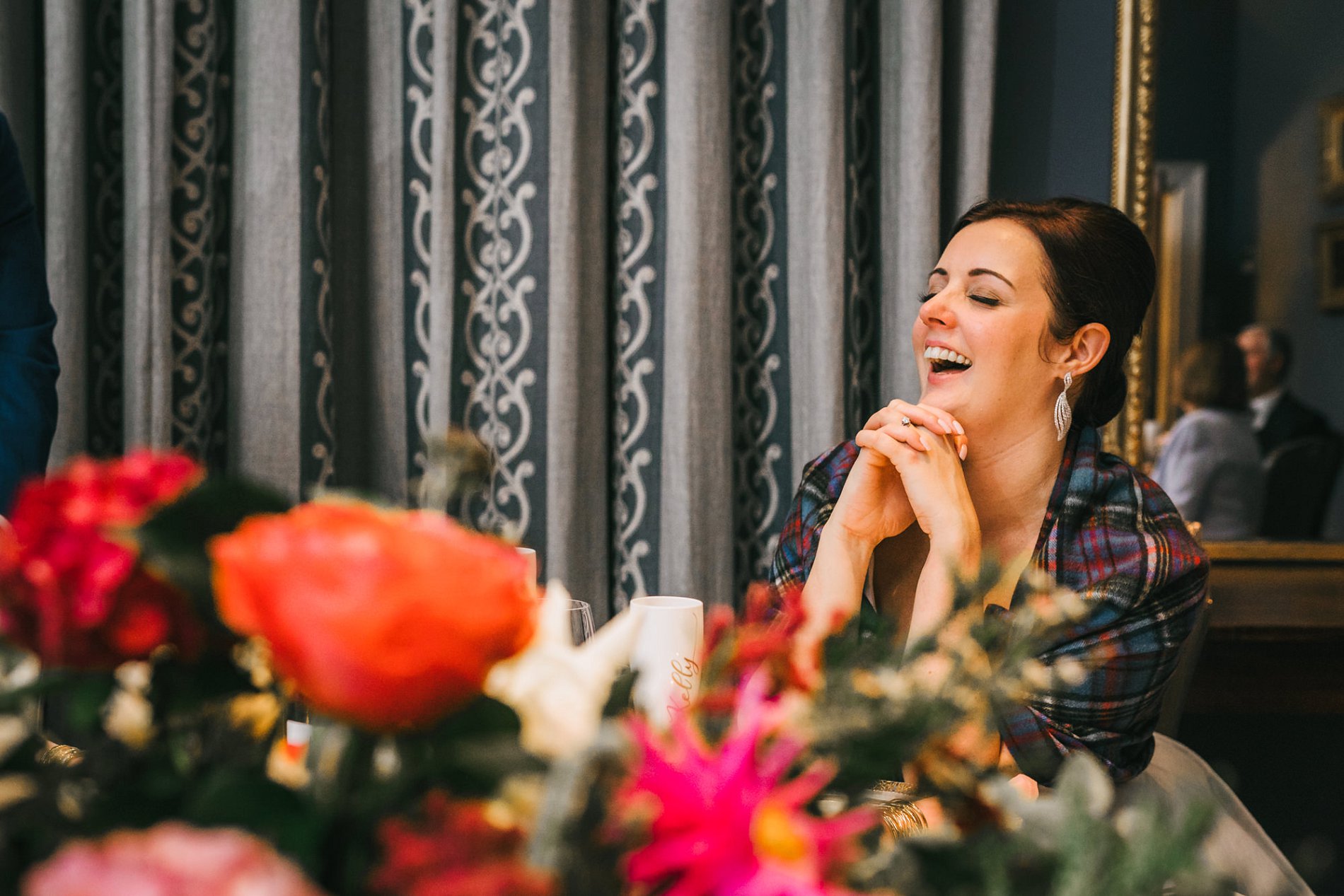 The team at Rudding Park made the whole trip so special and went above and beyond. From the moment we arrived – when they’d left a cookie for my nephew with his name on in the bedroom – to the private breakfast room setting the morning after our wedding, I couldn’t be any more thankful to them.

It’s been such a challenge with COVID and the wedding was not what we thought it was going to be when we booked our original date, but I can honestly say I could not imagine a more perfect place, with such lovely, attentive staff, who can accommodate everything from a micro wedding like ours to a big wedding like we had initially planned.

The ceremony was my favourite bit, as it was filled with laughter and tears. Saying the words were so important to us and neither of us quite expected to feel so emotional. At one point the registrar asked for a tissue to be passed to me as I had a tear on my cheek. My dad dutifully handed me one which I dabbed my eye with. Tom held his hand out to take it from me, but before he could, I popped the tissue down my bust and carried on like it hadn’t happened. We have some great pictures to remember that moment! 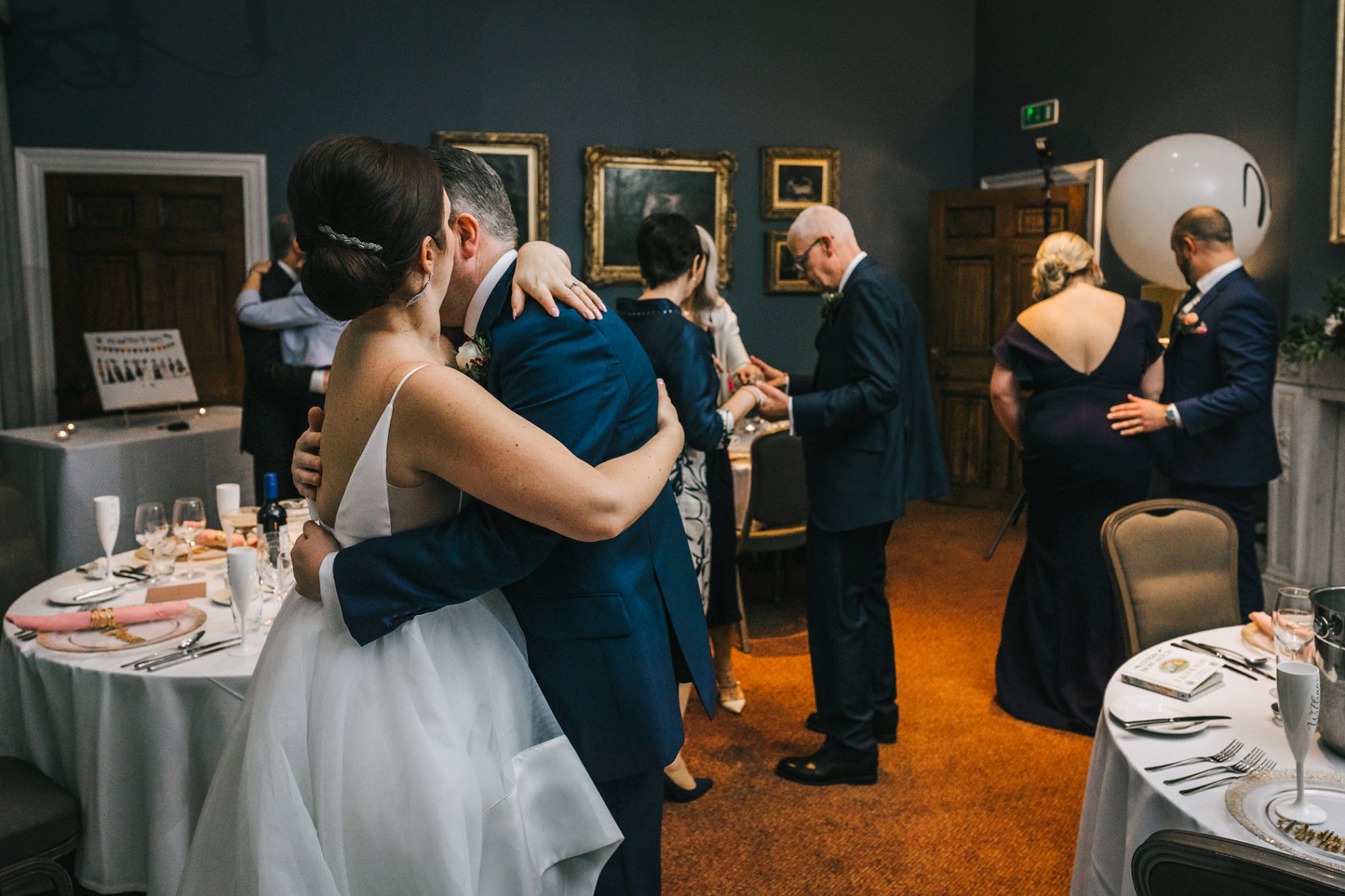 We went to The Fingal in Edinburgh as international travel was banned, and it was a really chilled break. It’s the sister ship to the Royal Yacht Britannia, so we had a really quirky room with it being a boat, and enjoyed super amazing food too. 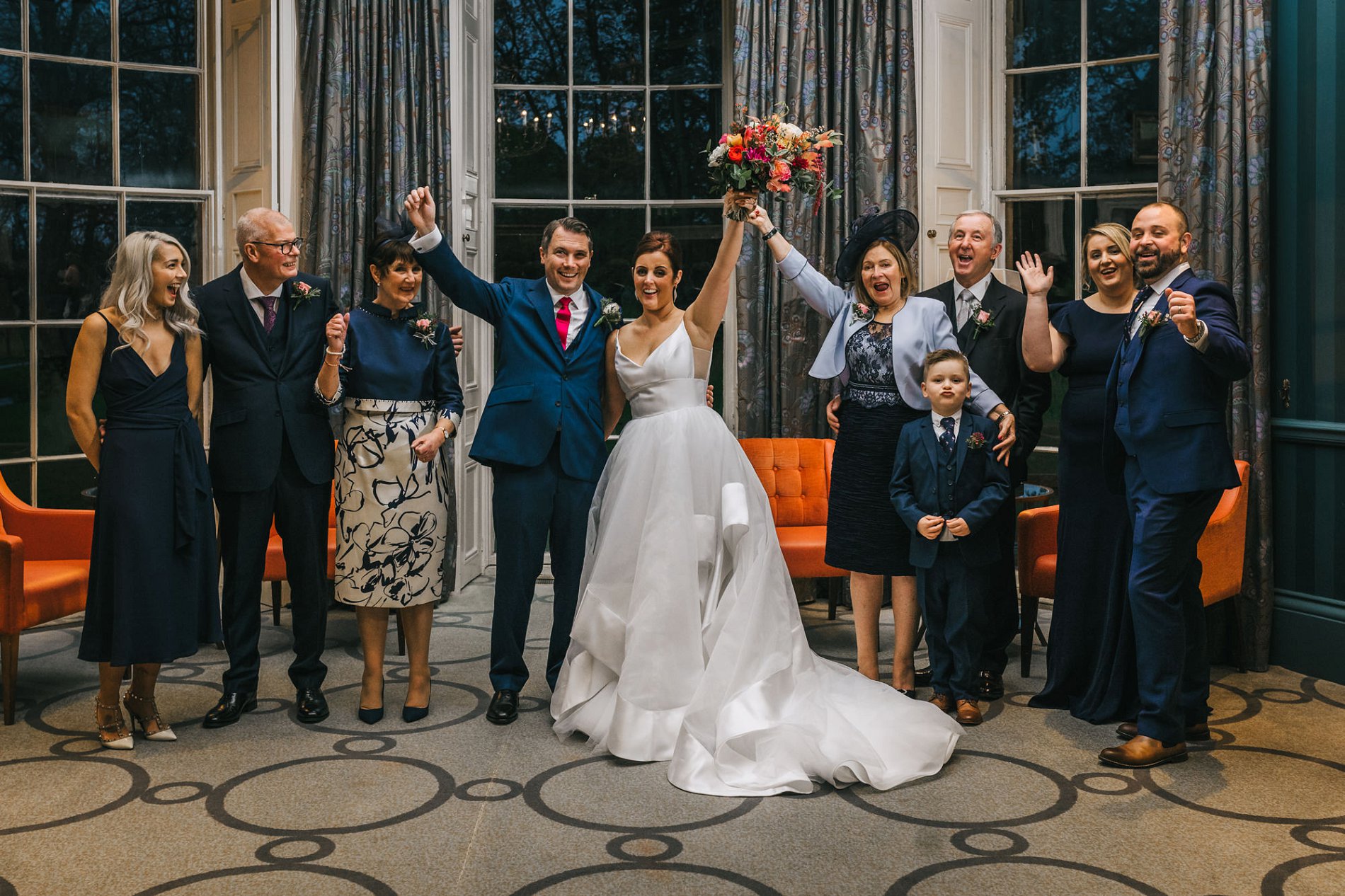 My top tip for other Brides Up North would be: remember why you are getting married. There were a lot of tears shed during 2020, with stress levels peaking many times over, but it wasn’t the party we were wanting, it was the commitment. Our wedding became stress-free and family orientated, and we couldn’t have asked for more.

We attended several Brides Up North wedding fairs and what we particularly liked was that they really showcased the venues, as well as the suppliers. We had great conversations with the different exhibitors and were not bombarded with information. The real wedding section on the website was also great – we got so much inspiration!