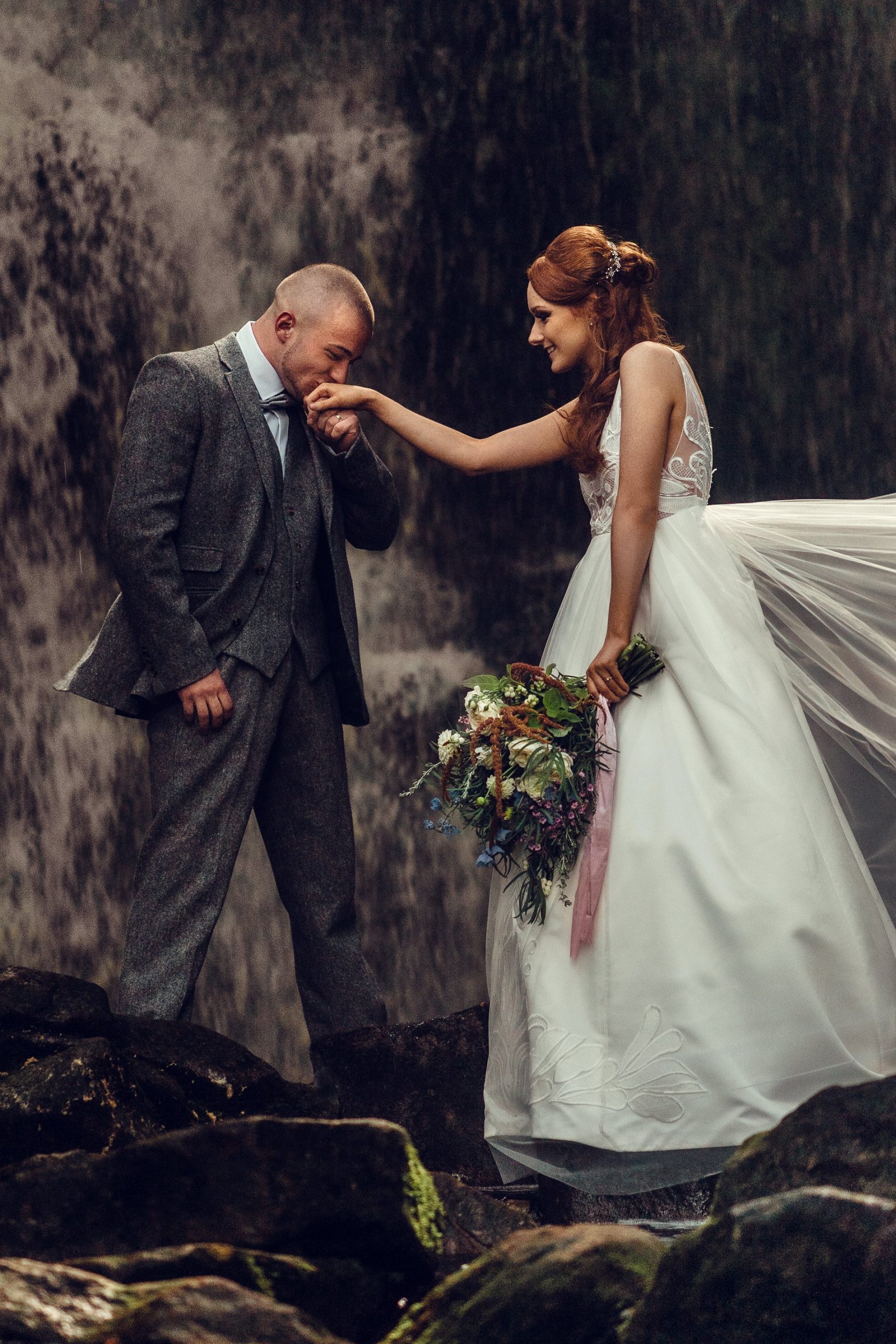 Photographer Nina and wedding planner Ellen of UNVEILED Network Member LND Events came up with the concept of finding a ‘natural cathedral’ and this enchanting, mountainside waterfall is the perfect remote and unique destination for a crazy elopement – if you can find it!

Wild times make people in love do wild things and I doubt any of us can remember a time when the world was more topsy turvy than it is now! But we’re still seeing weddings going ahead and we’re still being absolutely blown away on the daily by the beauty of the elopement and micro weddings that come across our desks. Today’s styled shoot really takes the wedding cake though!

With the styling kept to a minimum, the moody and atmospheric setup really sings, and with a remote and tricky location like this, minimal is as practical as it is beautiful. These images certainly aren’t lacking though. The dramatic impact of the statement gown’s light, white skirt blowing in the wind in front of the fountain is nothing short of stunning.

Ellen wanted to tell a tale of luxurious romance, rolling with the punches of the times and encouraging couples to consider alternative locations which wouldn’t perhaps be an option in a normal wedding situation with say, 100 guests. Sometimes it’s okay to just be about the bride and the groom (in this case played by a real recently engaged couple!) and the special moment they’re sharing, and then you can always do the big celebration further down the line.

We’ve been chatting to Ellen to find out how it came together, and how it felt to relinquish control on the day due to the Covid restrictions on numbers! 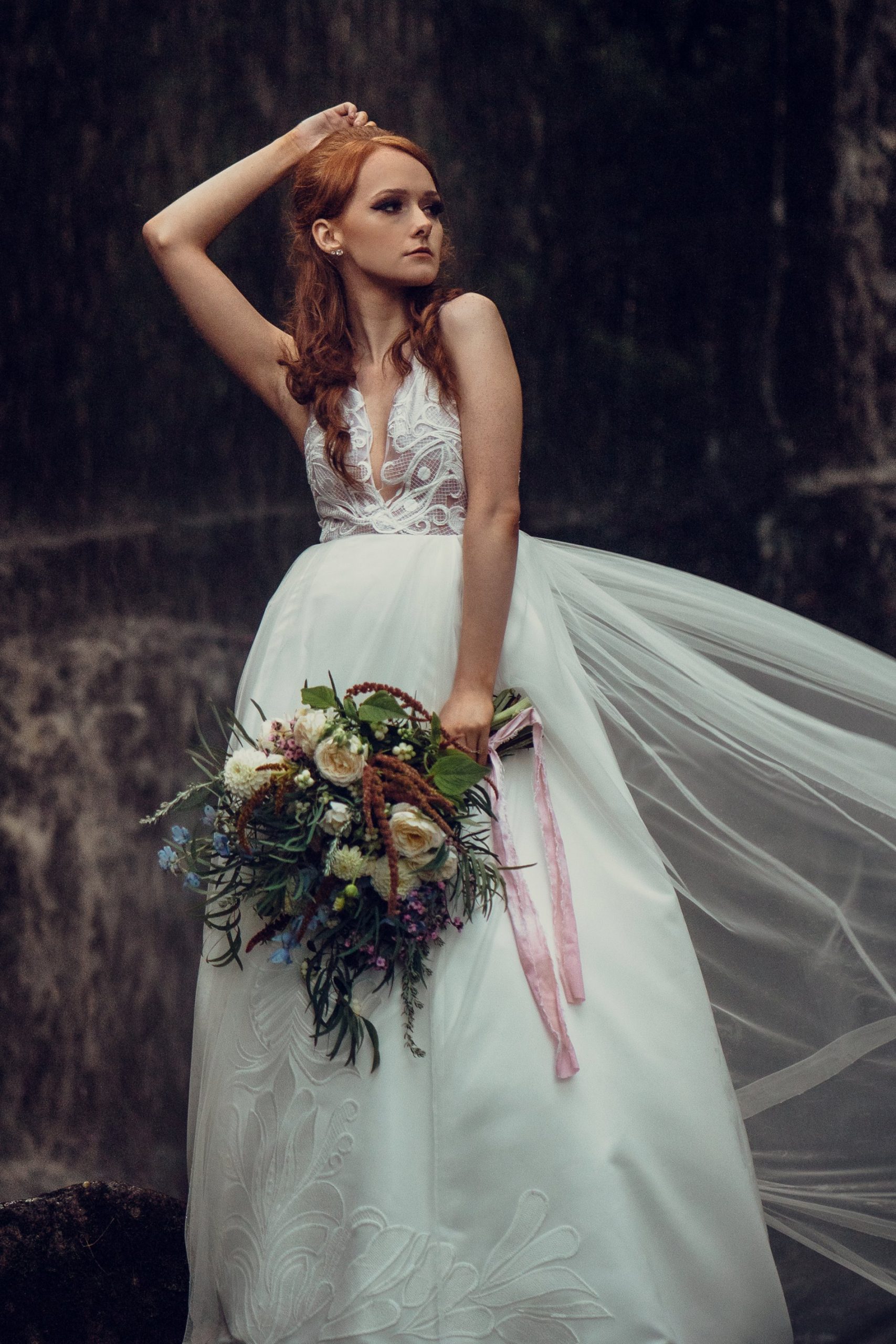 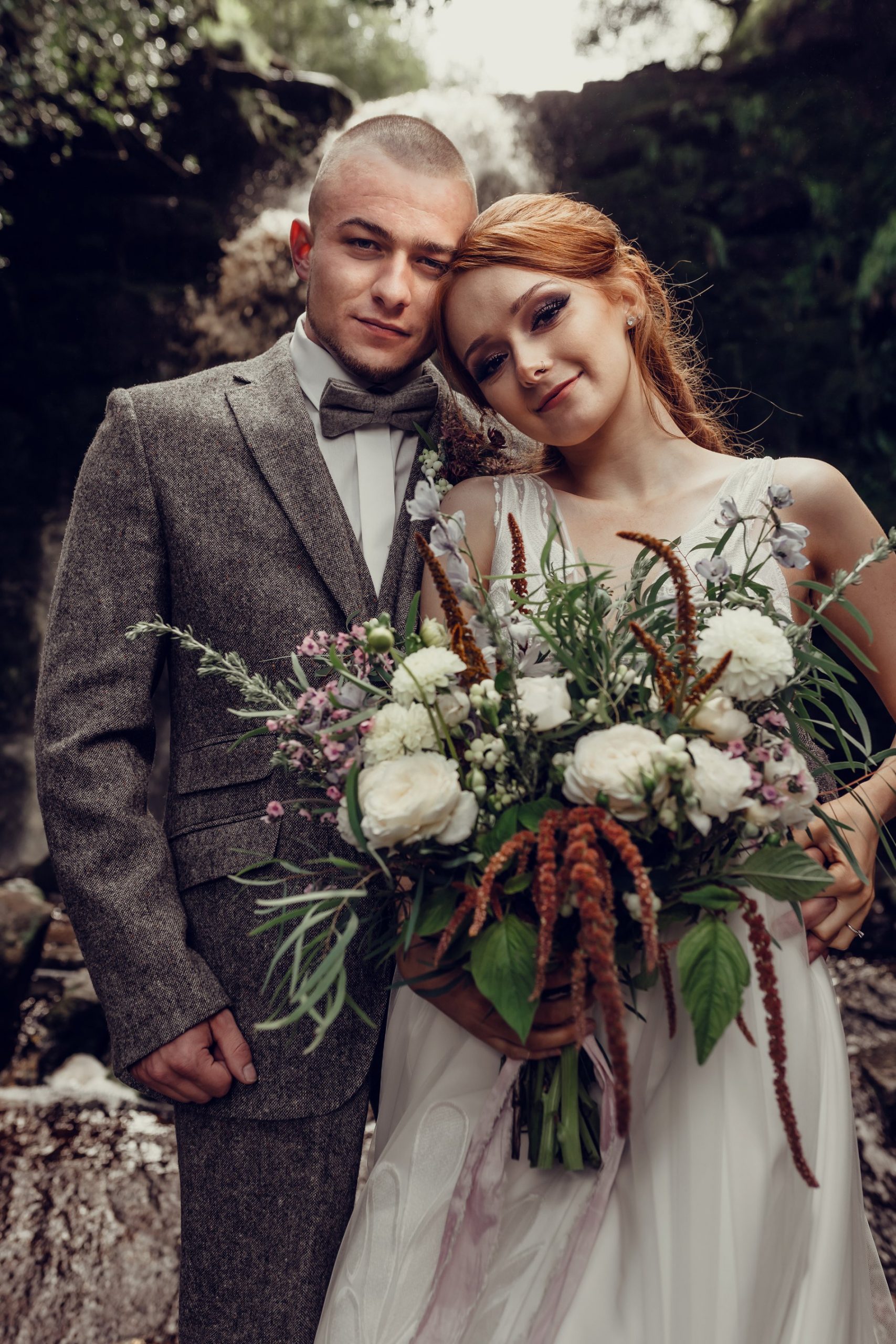 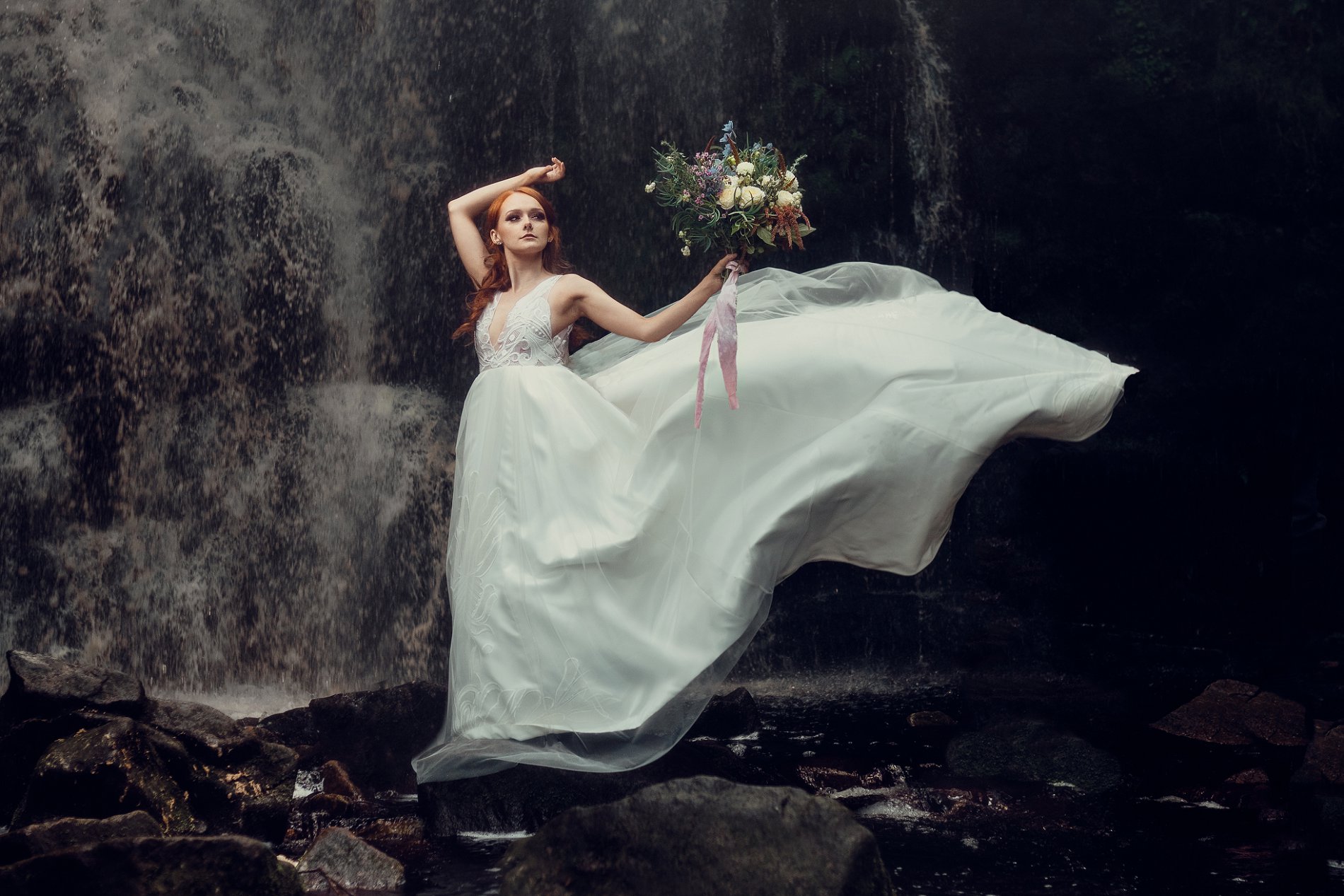 Ellen says: With this styled session, Nina wanted to demonstrate an outdoor, intimate elopement of a vibrant young couple in a natural cathedral.

Nina says:  With the current Covid crisis, I wanted couples to consider outdoor, intimate locations that could offer a sense of awe. I reached out to Jade and Cam who also happened to be recently engaged, and they were keen to be involved. The surrounding location was very reminiscent of the lavender fields in Provence, so it offered a very French feeling to the shoot, as well as a beautiful waterfall as a bonus. The resulting images and teaser film give a flavour of ‘France meets Yorkshire’. 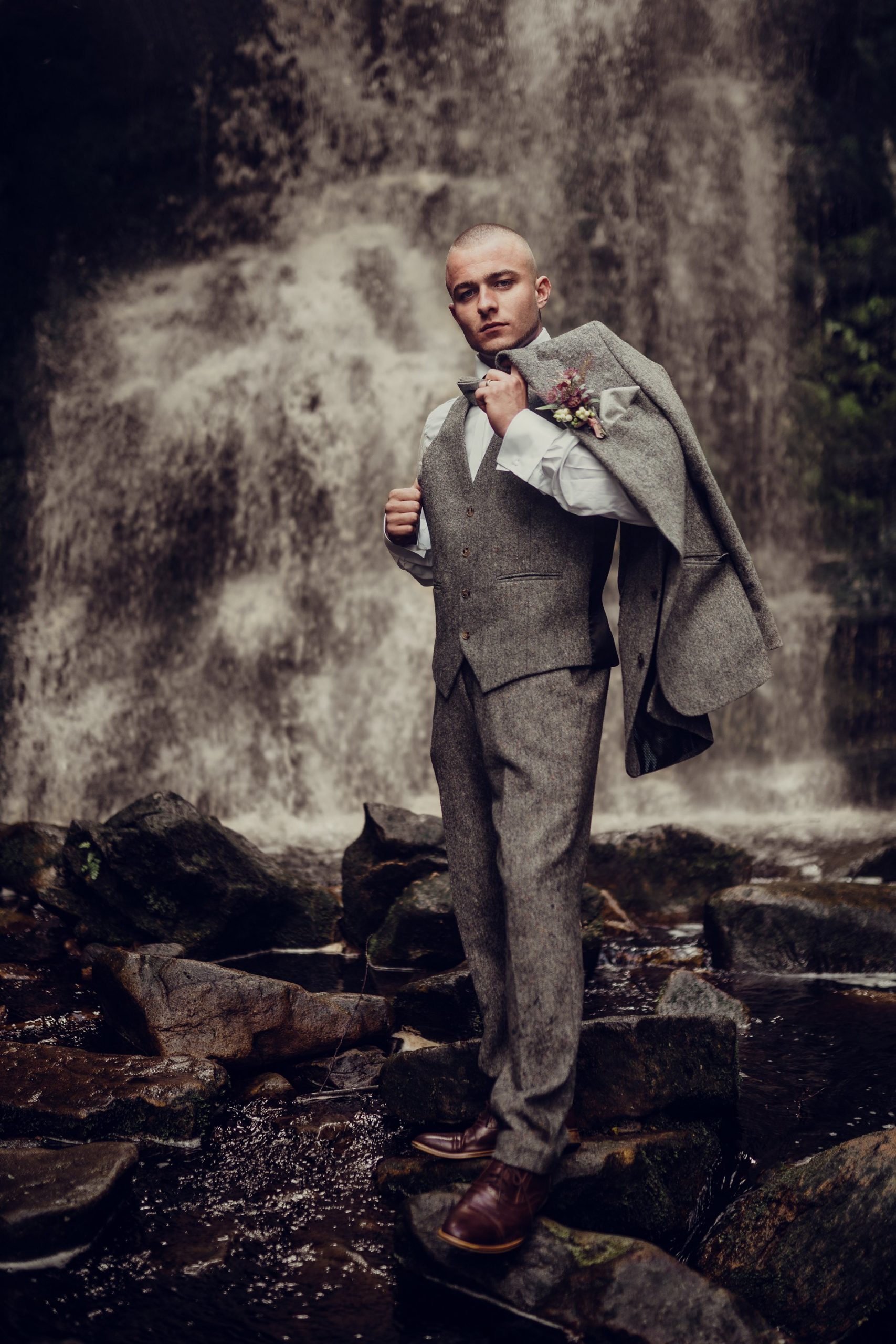 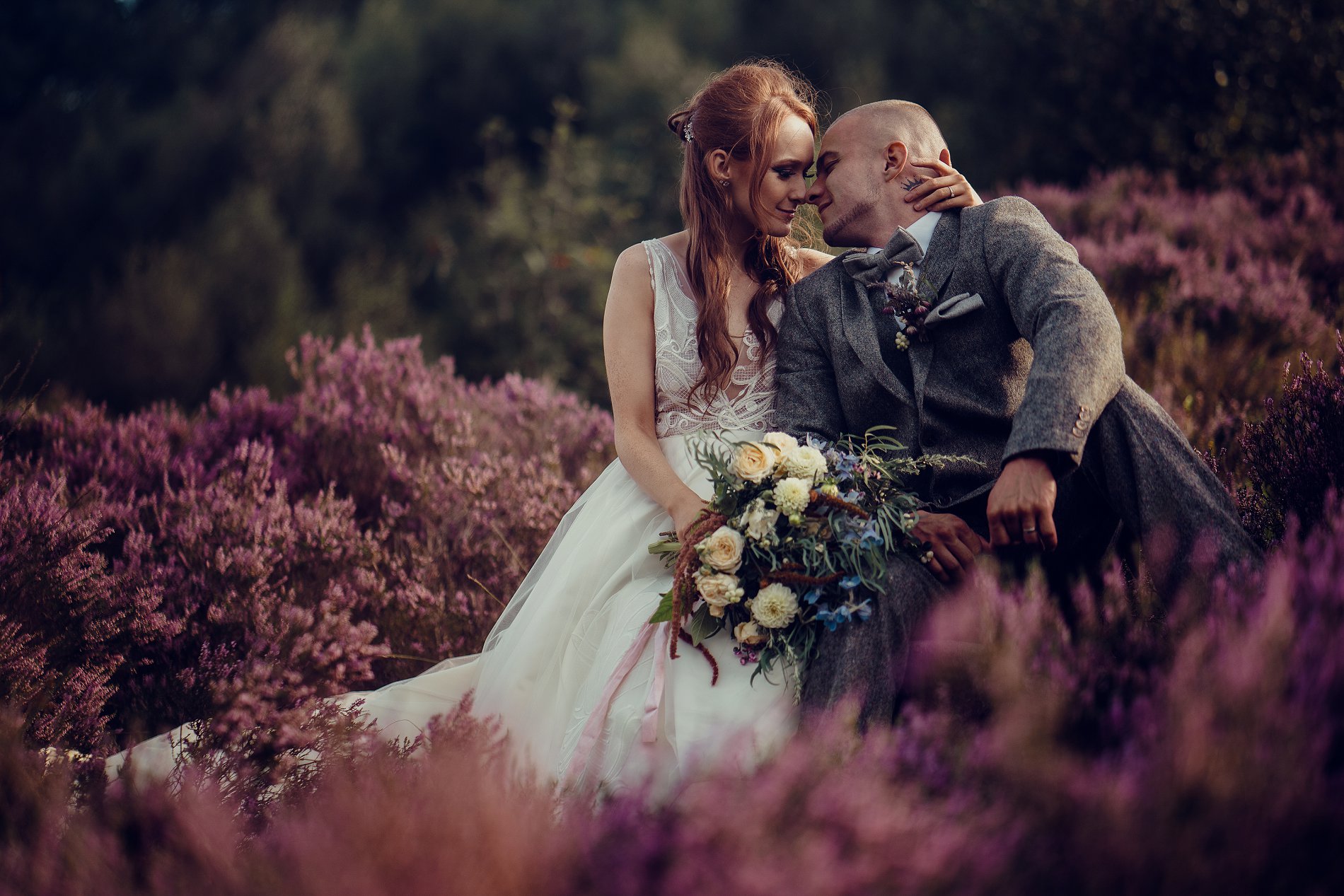 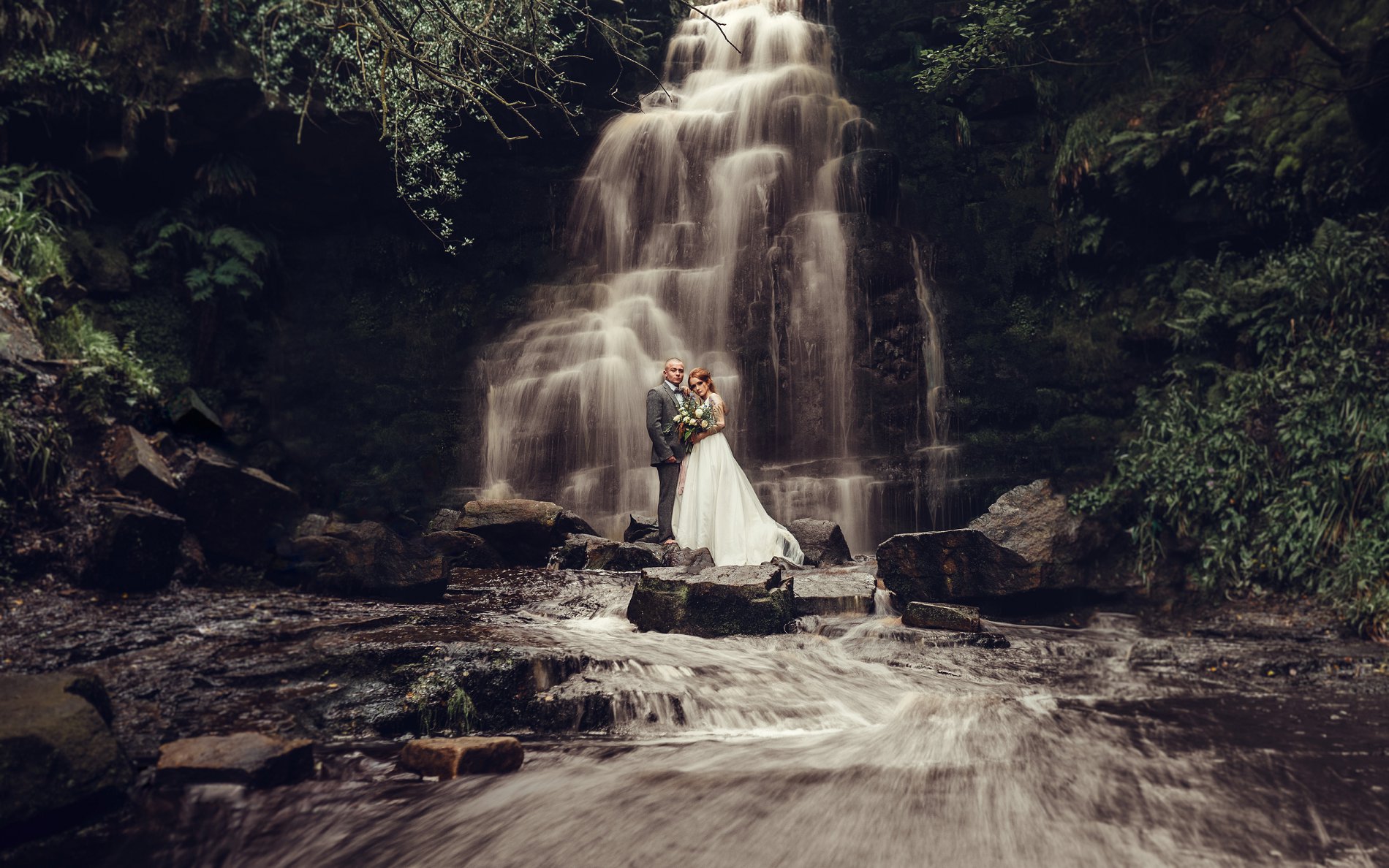 Nina scouted the location over a year ago. It took two attempts for her to reach this gorgeous waterfall as the exact location is not widely available so trial and error (and a lot of effort) played a huge part in finding it. Not only that, but the route is quite difficult and so pre-planning was a must! Rather than be a negative though, this was seen as finding a gem that could be just for the couple to elope, changing the emphasis from being about big celebrations to simply capturing the aforementioned sense of awe that we wanted to achieve – which could be replicated in easier locations! 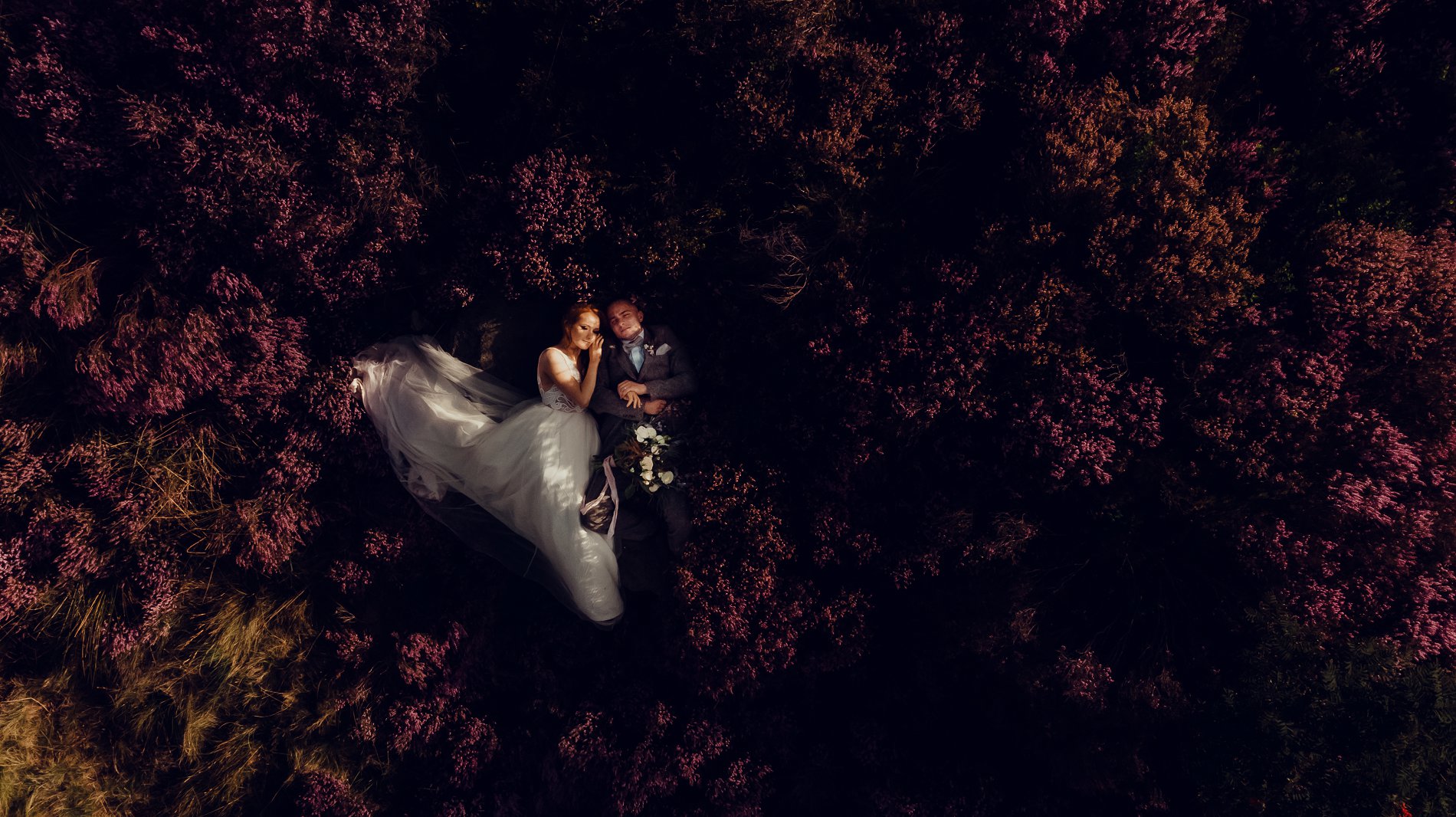 The shoot was purely about focusing on the couple eloping so, other than their attire and the bouquet, there were no other styling details. Normally this would seem strange but in the current climate, when couples have had to rethink all their ideas due to restrictions, a lot of emphasis has been put on elopements because it’s very hard for couples to select between their important guests when the maximum guest numbers are increasingly low. This was a ‘marry now, party later’ suggestion which shows that you can still do it, but in other breath-taking ways.

When it came to flowers for the big day, Ryan Lewis wanted to create something that fitted with the season, the setting and the bride’s skin tone, hair colour and dress. Ryan’s general style is luxury romantic and as such he focussed on a design with lots of texture, a muted palette and lots of scent. The day before the shoot he walked the flower field to see what was in season and he selected the blooms that would meet with the image we had in our heads.

Roses and dahlias formed the main focal flowers, supported with pink Chinese forget-me-nots, blue Delphinium, snowberries, Amaranthus and the most gorgeous glaucous foliage. The final design was quite a classic shape and was finished with pink satin ribbon. The groom’s buttonhole echoed the bride’s bouquet and contained Astrantia, snowberries, foliage and dried elements, all finished with pink ribbon. 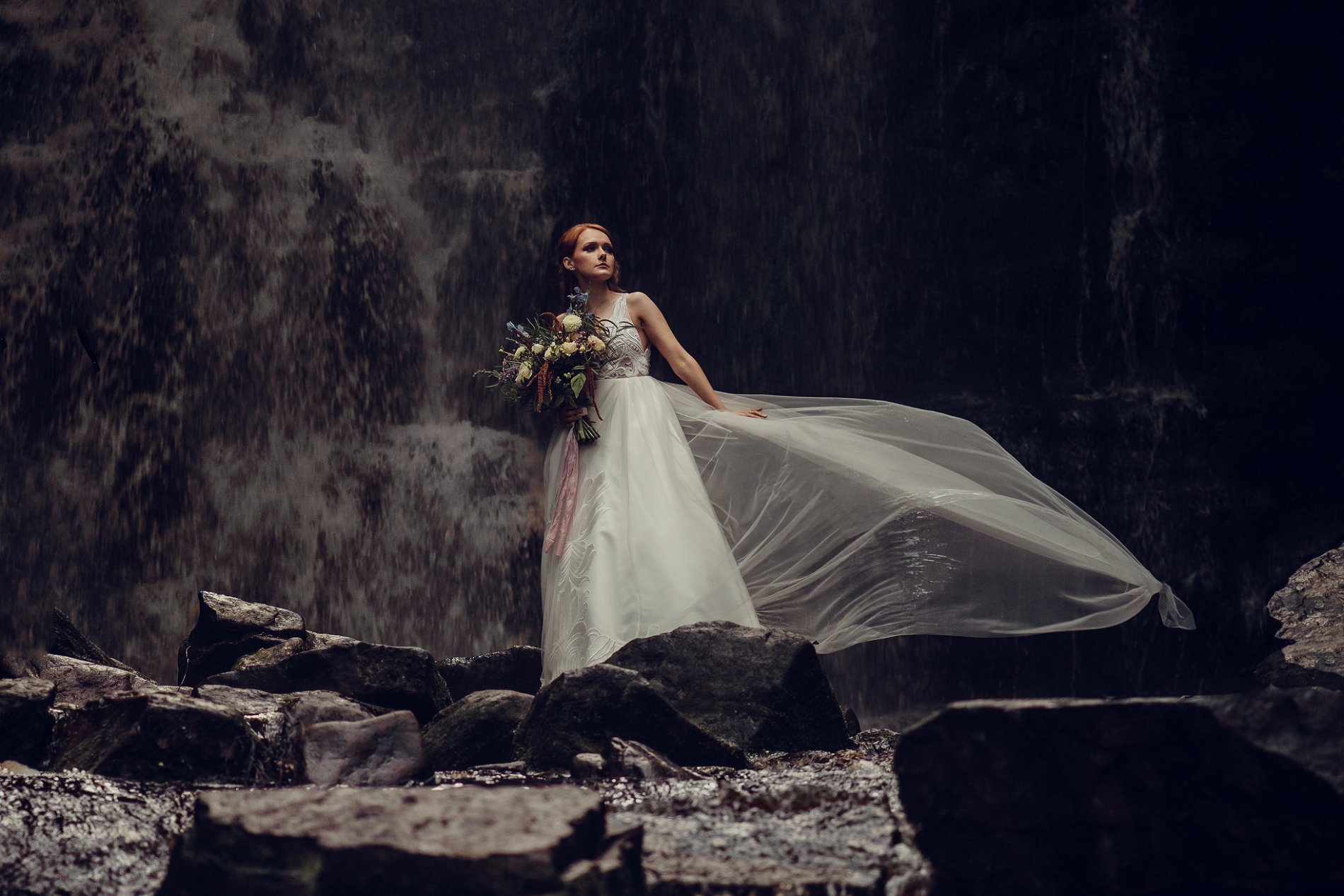 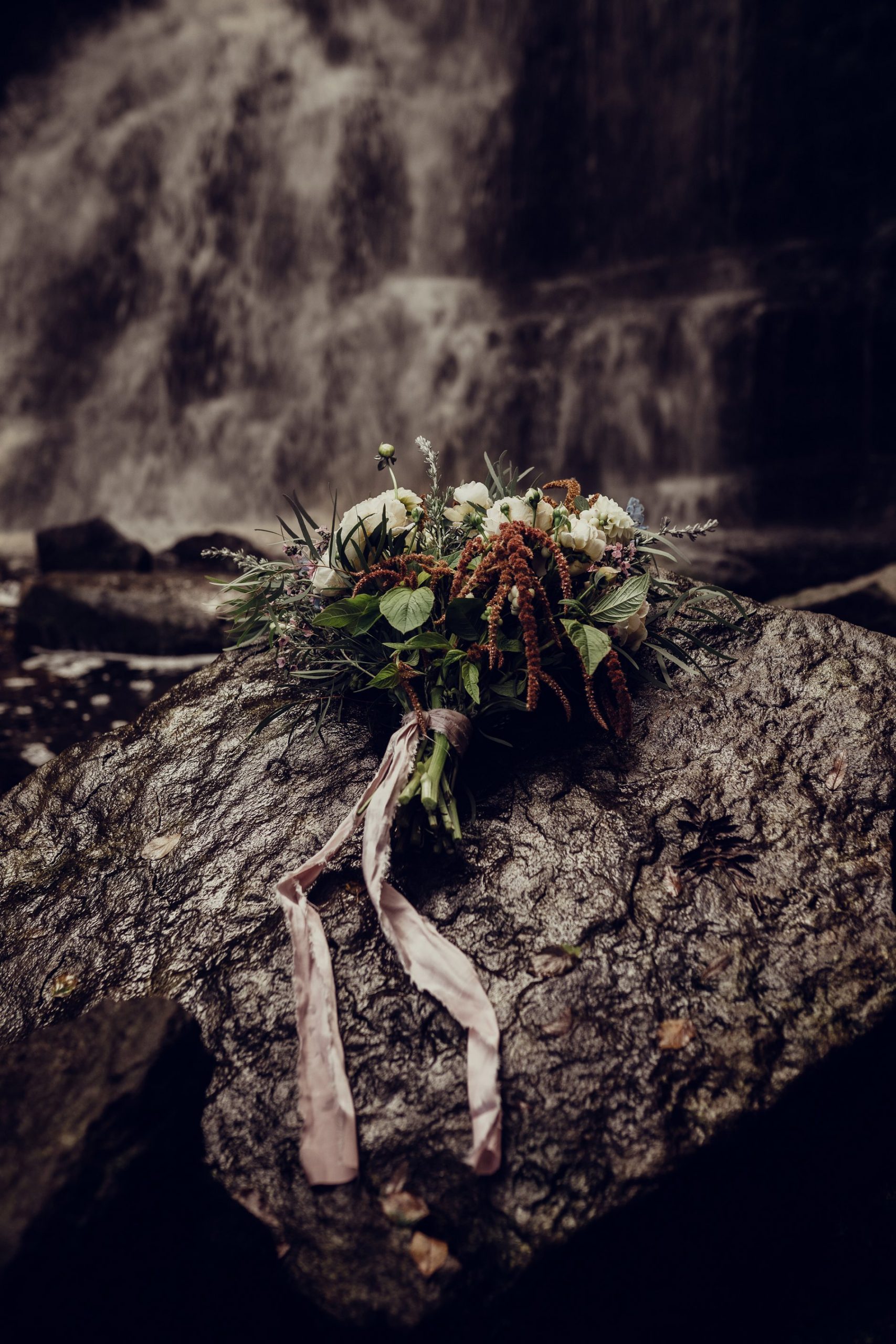 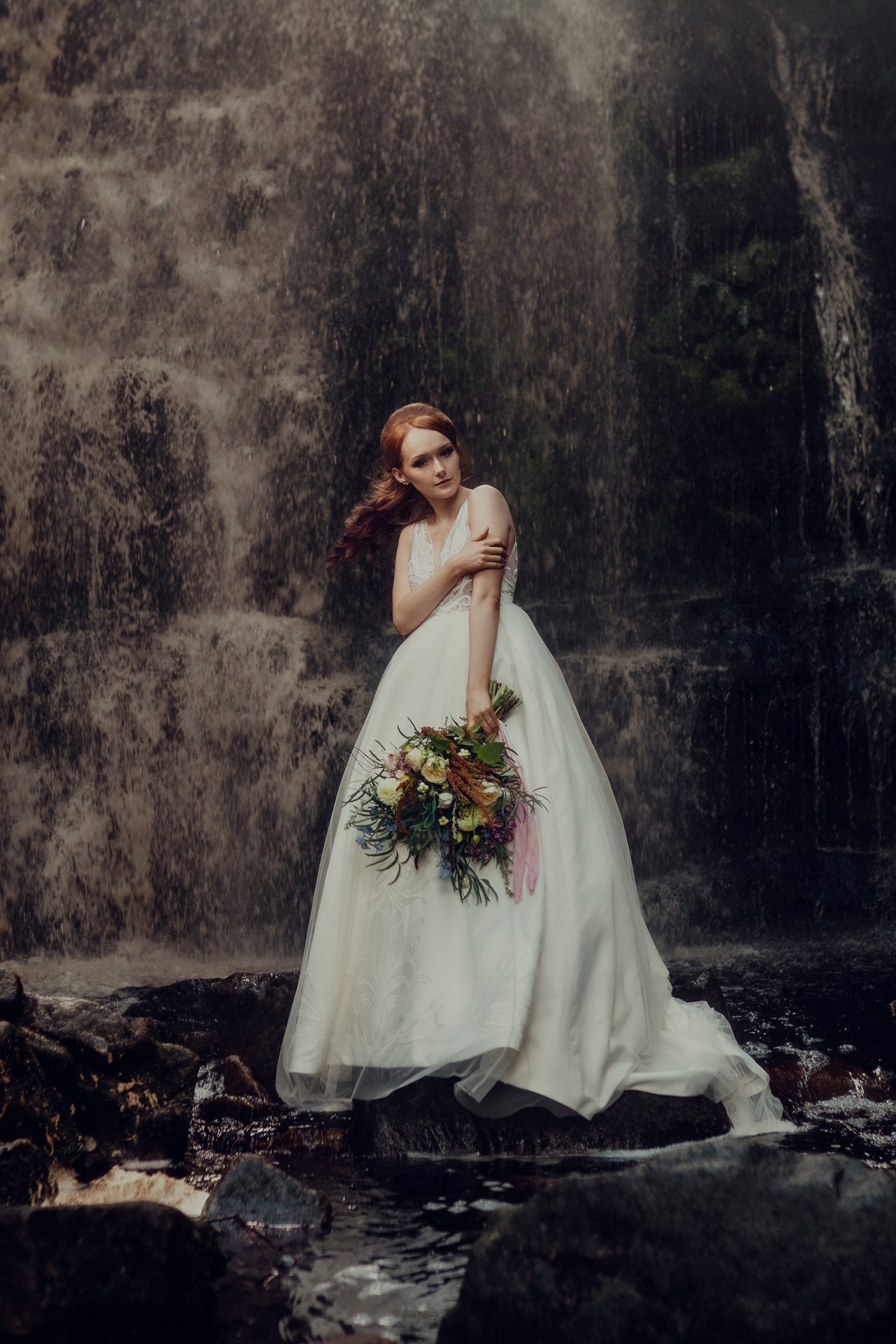 Wendie Towler who owns UNVEILED Network Member boutique Perfect Fit Bridal made Jade’s dress. The dress needed to be a statement piece, which wouldn’t get lost in the spectacular backdrop. The design itself was quite simple; a plunging neckline with delicate shoulders with a deep V back and a huge train. The bodice had individual appliqués hand sewn to create the unique design, while the satin skirt also had the lace embroidery pieces attached to the bottom, with a soft tulle over to give an opaque appearance, adding a little romance to the final design. Wendie named the dress ‘Rhea’ meaning flowing stream!

Jon-Paul Menswear supplied the suit for Cam. We wanted something that fitted with the natural country surroundings of the location so tweed seemed a perfect option and, due to the simplicity of Wendie’s dress, the suit complemented it perfectly. We went with a grey tone fabric with brown brogues to match. 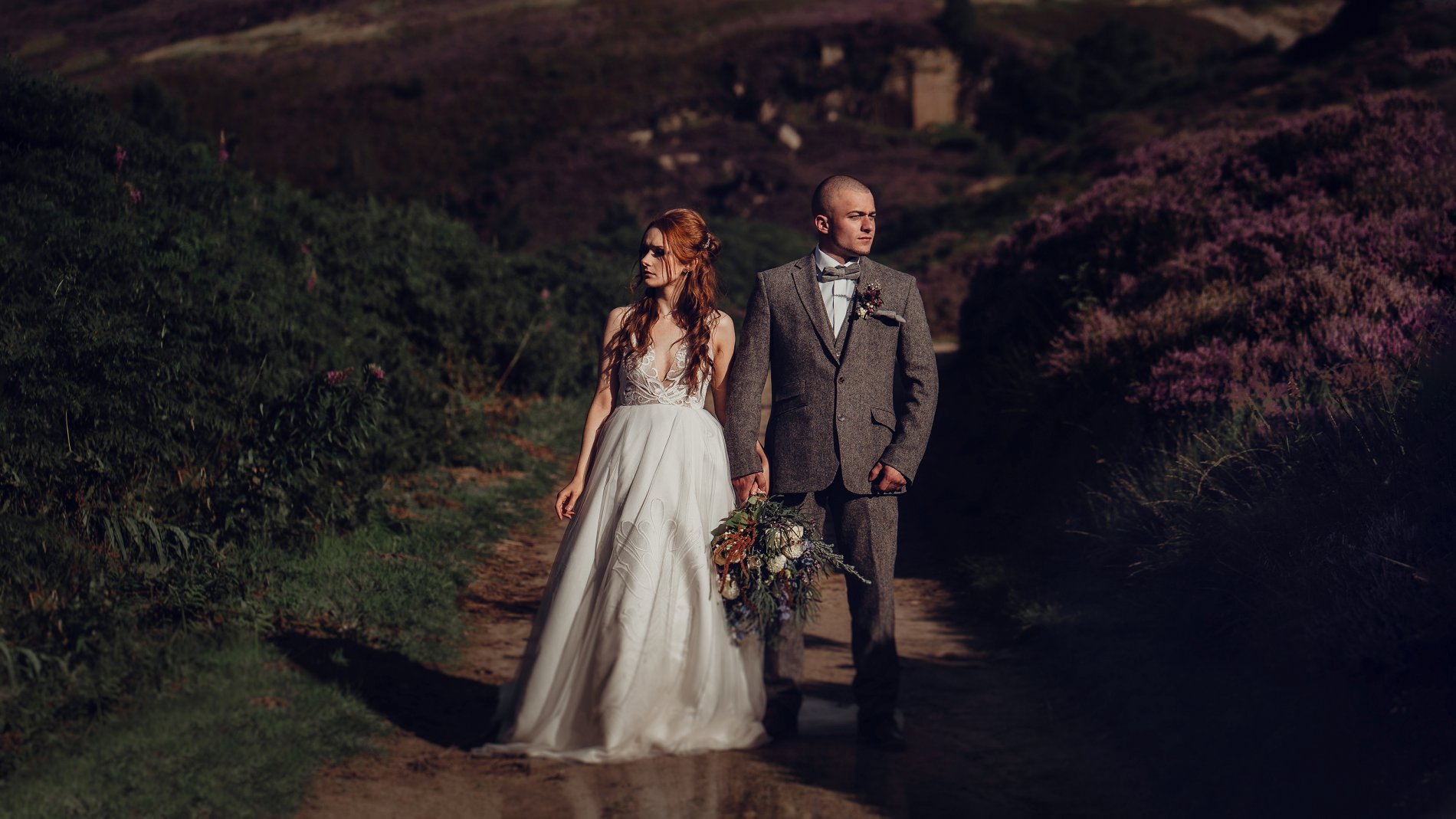 Annais Siddall covered Jade’s makeup and chose a nude smokey eye with a little bit of black on the outer corner and a black wing to finish it off. The nude colours were to fit with the wedding look, as ‘natural glam’ is always a go to for brides but Annais added the black and the wing to make the eyes stand out that bit more and to keep it from being too ‘traditional’ to fit the aesthetic of the shoot.

She applied a deep warm tone nude lipstick to also tie in the eyes and provide an overall more sultry look. She kept Jade’s completion tan and warm so that she didn’t look too pale or washed out as this could have caused her to blend into the cool tones of the waterfall and its surroundings. Giving Jade a more ‘golden’ completion gives the illusion that she is glowing from within. We wanted her to stand out, as she is the star of the show!

Leanna Keating worked on Jade’s hair. Her main source of inspiration was Pinterest however she was also given Nina’s vision for the images that helped her create a loose boho, romantic hairstyle. The hair needed to suit the low back of the dress and Leanna felt it needed some drama. She used a wide curling iron, which creates a loose curl. With this shoot being on location Leanna used pin curl clips to hold the curls in a barrel curl form, which could be let down on arrival. The bouffant was simple backcombing at the root with the addition of Got2Be volume powder, smoothed over with a backcombing brush. Leanna decided to leave the fringe sweeping over the forehead and behind the ear to give a touch of elegance. Throughout the styling Leanna used Schwarzkopf Ultimate Hold hairspray and used a hair vine to adorn the hairstyle. 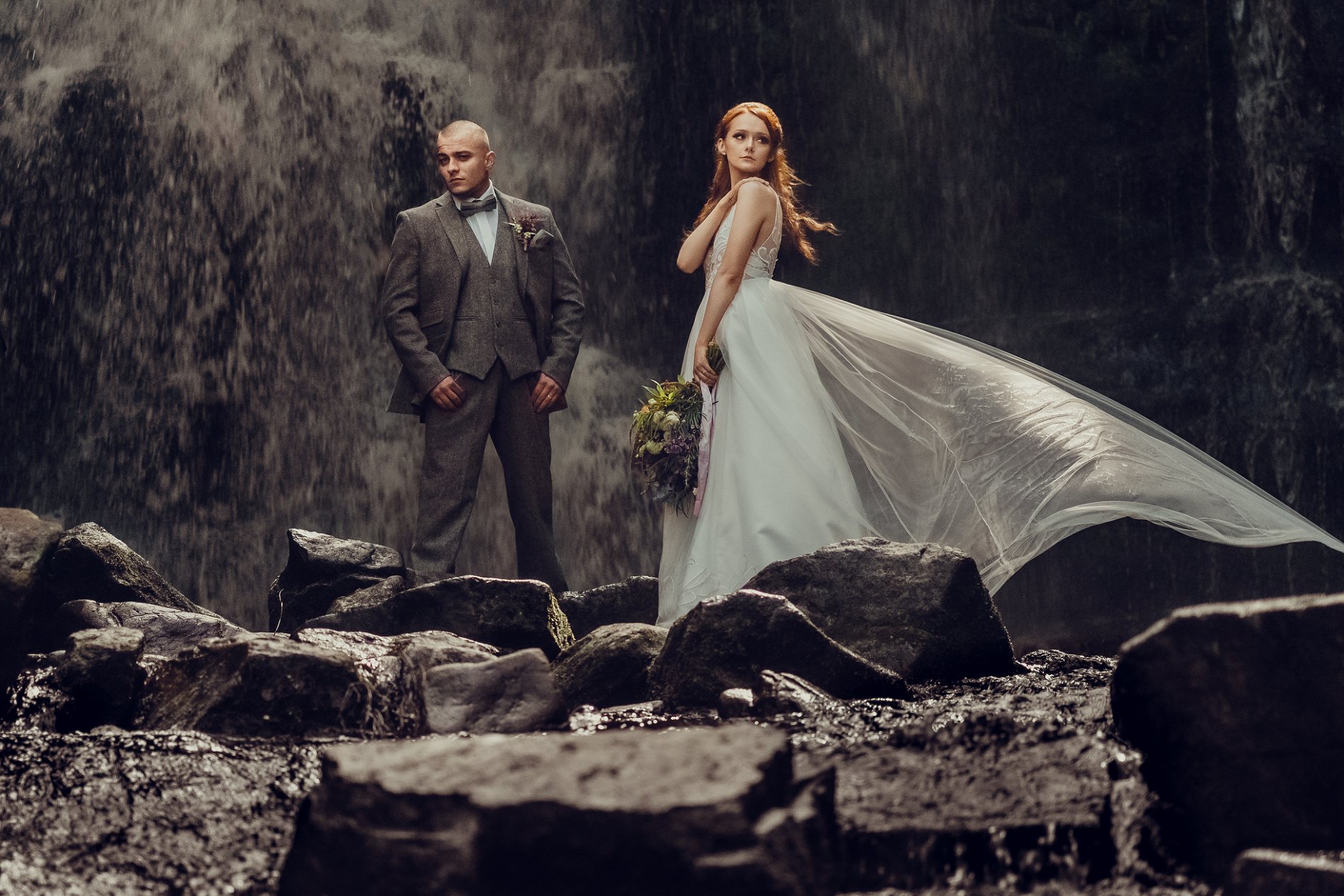 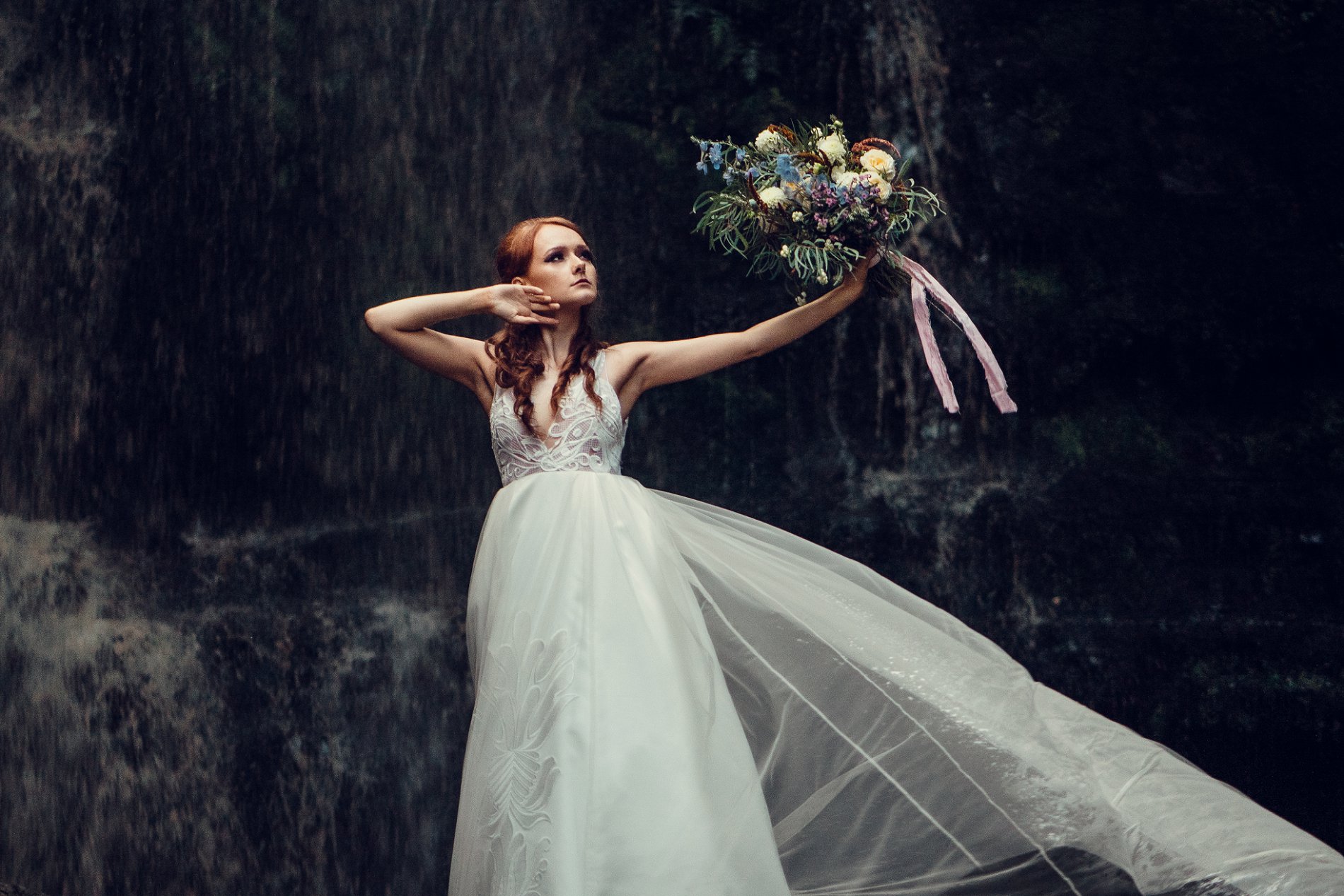 As the narrator and organiser of this shoot, it was very strange not to be there on the day. As the shoot didn’t require any styling requirements, the organisation all came in advance and whilst I was very welcome to tag along, there wasn’t really a role for me on the day as photographers such as Nina have the creative vision to know what to do with the couple without any planner intervention.

It was therefore an amazing surprise for me to see the photos for the first time and see just how stunning the waterfall was as a backdrop for such a romantic situation. In this current climate, we wanted to show that we can adapt as necessary to suit the needs of couples and I believe that was achieved.